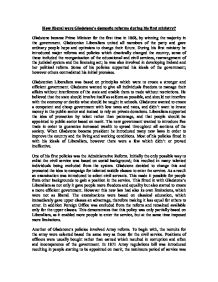 How liberal were Gladstone's domestic reforms during his first ministry?

How liberal were Gladstone's domestic reforms during his first ministry? Gladstone became Prime Minister for the first time in 1868, by winning the majority in the government. Gladstonian Liberalism united all members of the party and gave ordinary people hope and optimism to change their future. During his first ministry he introduced major reforms and policies which drastically changed the country, some of these included the reorganisation of the educational and civil services, rearrangement of the judicial system and the licensing act; he was also involved in developing Ireland and her political reform. Some of his policies supported his ideals of the government; however others contradicted his initial promises. Gladstonian Liberalism was based on principles which were to create a stronger and efficient government. Gladstone wanted to give all individuals freedom to manage their affairs without interference of the state and enable them to trade without restrictions. He believed that the state should involve itself as seldom as possible, and should not interfere with the economy or decide what should be taught in schools. Gladstone wanted to create a competent and cheap government with low taxes and rates, and didn't want to invest money in the public sector and instead to rely on private donations. Liberalism supported the idea of promotion by talent rather than patronage, and that people should be appointed to public sector based on merit. ...read more.

This law supported Gladstonian Liberalism, as it provided a more efficient and cheap government and offered more freedom to the public. Although it was unpopular with the aristocracy, this law was more liberal than administrative reform. This is because reorganisation of the army helped to improved the military strength of Britain and gave more independence to the public, whereas the administrative reform achieved that only partially. Another policy which proved to be effective was the Law Reform. In 1873 Gladstone passed the Judicature Act which combined the two law systems, small courts were united into one bigger one and became basis for laws today. This enabled the system to become fairer towards the public, and was therefore disapproved of by the aristocracy who felt their privileges were being taken away. The law also helped to the government to become more effective, therefore corresponding with Gladstonian Liberalism. Law and Army reform appeared to be those policies which fitted in with Gladstone's ideals, as they both fulfilled his promises. Gladstone introduced further laws which helped the new government to become more Liberal. In 1872 he introduced the Ballot Act, which enabled individuals to vote in secret. This resulted in there being less political pressure on individuals, who could now vote for the party they truly supported. Although Gladstone didn't support the act himself it was popular among the Radicals and fitted in with his liberal ideals, as it gave people more freedom and improved the efficiency of the government, and there was less bribery and corruption. ...read more.

The reform which did not support Liberalism at all was the Licensing act of 1872. Through this act, Gladstone reduced the consumption of alcohol. The new policy required sellers of alcohol to have a licence, closed some pubs and prevented sellers more modifying the drinks. The policies were enforced by the police and resulted in people having less freedom and going against Liberalism. Although the act was supported by liberals themselves it was very unpopular with the public. This act was the unliberal out of all the reforms Gladstone carried out. Other reforms were either fully aimed to fulfil Gladstonian ideas, or achieved that partially. Licensing act, however from the beginning intended to restrict the freedom of individuals, and therefore not supporting the idea of liberty. In conclusion majority of Gladstone's reforms were liberal. The law and administrative reform changed the system in order to enable working class individuals to enlist the system. In addition educational reform improved lives of many people and gave them a better start for the future. Gladstone achieved some of his ideals through army reform, by making the government more efficient and cheaper. However some of his polices created limitations within themselves, like trade union legislation, and restricted personal freedom. Besides those, there was also the Licensing act which was a total contradiction to Gladstonian Liberalism, introducing constrains on personal lives. Therefore it is evident that most of his laws were aimed to be Liberal, but in reality only a few fully upheld liberal values. ...read more.

This is an impressive response in which the author demonstrates a great deal of knowledge and organises ideas in a logical fashion. Gladstone's key reforms are evaluated carefully and a conclusion is reached that refers well to the evidence. 5 out of 5 stars.