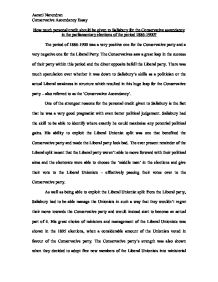 One of the strongest reasons for the personal credit given to Salisbury is the fact that he was a very good pragmatist with even better political judgement. Salisbury had the skill to be able to identify where exactly he could maximise any potential political gains. His ability to exploit the Liberal Unionist split was one that benefited the Conservative party and made the Liberal party look bad. The ever present reminder of the Liberal split meant that the Liberal party weren’t able to move forward with their political aims and the electorate were able to choose the ‘middle man’ in the elections and give their vote to the Liberal Unionists – effectively passing their votes over to the Conservative party.

The makings of an effective politician is the ability to identify the changing socio-economic and political trends in society and try to harness them for the good of their party. Salisbury definitely did this and was rightly dubbed as a ‘cautious reformer’. Conservative ideology didn’t allow for great social reforming and Salisbury’s government themselves were believers of ‘Laissez-Faire’ and ‘Self-Help’, it was understood, however, that some government intervention was needed in order to stop the rising levels of poverty. Salisbury made enough reforms to benefit the populace, but not enough to go against the fundamental Conservative ideology. It is for this reason that some may argue that Salisbury deserved some personal credit for the Conservative Ascendancy.

In addition to good party management, Salisbury also organised the Conservative party well. His appointment of Middleton and Akers Douglas ensured that the party always had a good grasps of the issues at hand. This is vital when considering the lack of structure of the Liberal Party. In this case, Salisbury’s party organisation skills may have been balanced by the weakness of the Liberal party.

Although many of Salisbury’s personal skills came into play during this period, it is also prudent to note that the Liberal party were also severely weakened in this period. Some may argue that the weakness of the Liberal party didn’t affect the way Salisbury handled many situations, but it is a know fact that when something good is compared to something good, the good instance usually ends up looking a lot better than it actually was. Who are we to say that, had the Liberal weakness not been apparent during that period, the Conservatives would’ve enjoyed the ascendancy as they did?

Working Class Conservatism was also a great factor in the Conservative ascendancy, one that Salisbury could claim no credit for. Working Class Conservatism, the gaining of support from working class people in Liverpool, Birmingham, Lancashire and East London, was a result of the racial prejudice apparent in those areas. The divide between Catholics and Protestants in Liverpool meant that many of the Catholics moved to support the Conservative party. This was more a case of choosing the lesser of two evils than Salisbury’s great leadership skills.

In conclusion, although the Liberal weakness did make the conservative success seem better than it may actually have been, Salisbury did deserve some personal credit. His ability to exploit the situation, lead the party successfully, organise the party effectively and appoint ministers with similar outlooks to himself was what made the Conservative party as successful as it was. It could be said that the liberal weakness needed to be there in order for Salisbury to be able to exploit it, but the Liberal split was bound to happen and it takes a good leader to be able to identify when to and how to exploit a situation like that. This main theory is that