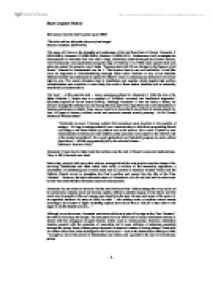 How secure was the Tsars power up to 1904

How secure was the Tsar's power up to 1904? 'The rich swell up with pride, the poor from hunger' Sholom Aleichem (1859-1916) This essay will focus on the strengths and weaknesses of the last three Csars of Russia: Alexander II (1855-1881), Alexander III (1881-1894), Nicholas II (1894-1917). Furthermore it will investigate the consequences of autocratic rule over such a large, industrially under-developed and diverse country. The Fundamental Laws (published during the reign of Nicholas II in 1906) made explicit what such autocracy meant, for example, Law 5 states "Supreme Autocratic Power belongs to the Emperor of all Russia". Married to Fundamental Law No 1 "The Russian State is one and indivisible" it left little room for argument or misunderstanding amongst either native Russians or any of her satellites. Nicholas himself was determined to uphold his father's views on autocracy and believed in his divine right to rule. This would ultimately lead to disaffection and anarchy which despite high politics, industrialisation and revolution is more likely the result of those factors identified and so succinctly described by Aleichem above. The 'poor' - in this case the serfs - were a pressing problem for Alexander II. After the rule of his father Nicholas I, Russia was in a position of "political, economic and intellectual stagnation" (Christian:Imperial & Soviet Russia (1997)). Although Alexander II was not really a liberal, his advisors amongst the nobility were and during the early part of his reign there was a new atmosphere of freedom particularly in debate. There was so much to be done that it was difficult to decide what to do first. All types of reform, political, social and economic seemed equally pressing. As Sir Donald Mackenzie Wallace stated: "Gradually, however, it became evident that precedence must be given to the question of serfage. . .So long as serfage existed it was a mere mockery to talk about reorganising Russia according to the latest results of political and social science. ...read more.

This became apparent when a member of the People's Will, Aleksandr Ul'yanov attempted to assassinate Alexander III. He was arrested and executed which greatly influenced his brother Vladimir who, after his conversion to Marxism, changed his name to Lenin. Therefore, following the early death of Alexander III in 1894 at the age of 49, the legacy left to Nicholas II was not encouraging. Nicholas II was well aware of the legacy of unrest left by his father but, equally, he was intent on maintaining the principle of autocracy. Part of his coronation speech (1894) makes both points clearly: "I am informed that recently in some zemstva [local assemblies] voices have made themselves heard from people carried away by senseless dreams about participation by members of the zemstva in the affairs of internal government; let all know that I, devoting all my strength to the welfare of the people, will uphold the principle of autocracy as firmly and unflinchingly as my late, unforgettable father" Nicholas II was young, 26, when he became Csar and he relied heavily on his advisers. Three of the chief advisers were Pobedonostsev, Witte and Plehve. Plehve was the director of the Csarist Russian Police (later Minister of the Interior) and as such was responsible for suppressing much of the political opposition to the Csar. Pobedonostsev had lost much of his influence after the death of Alexander III although Nicholas did hang on to the Russification policy (even extending it to Finland). However, Nicholas disliked the idea of systematic religious persecution although his weakness of character left him impotent in the face of his stronger ministers and advisers. Reluctantly, he allowed Sergei Witte to continue to expand Russia's industry in the 1890s, but seemed unaware of the social and economic distress in the countryside and the new cities. Thus, from the start of his reign, Nicholas decided to rule as an autocrat and not to make changes to the political or social system. ...read more.

The details of government bored him and he preferred to leave these to his advisers. He disliked unpleasant facts about the state of his country and his people so he chose to listen only to those advisers who would cover up the true state of affairs. Nicholas buried himself in the life of his family and neglected affairs of state. Subsequently, a disastrous war with Japan (1904-1906) would end in defeat and widespread revolution in 1905 would almost cost him his throne, Nicholas was forced to introduce reforms. He promised Russia a Duma, an elected parliament. Although he remained firmly in charge, he promised to allow the parliament some say in the government of the country. This was enough to placate the liberals and some of the moderate revolutionaries. But this was a chance lost. Nicholas had no intentions of sharing power with his people and made this plain in 1906 when he introduced the "Fundamental Laws" giving him complete power over the Duma. Nicholas II was to reap the seeds of dissolution sown by his father Alexander III and by the failure of his grandfather Alexander II to take his early reforms to their natural conclusion. Russia was given a taste of liberalism under Alexander II and it was snatched back by his father. Additionally, Russia remained backward and didn't grasp the potential of industrialisation quickly enough or the shift in economic power that it presented. Both peasants and industrial workers were overburdened with taxes as a result of the need to support an economy weakened by the reluctance of the Csars and their ministers to devolve power to outlying areas of their own land and satellite states such as the Baltics, Finland. and Poland. Like his father and grandfather, Nicholas was reluctant to share power with his people marking his own reign with a series of disasters, none of which he dealt with effectively, and ended with revolutions which resulted in his death and that of his family. ?? ?? ?? ?? Stuart Urquhart History - 1 - ...read more.