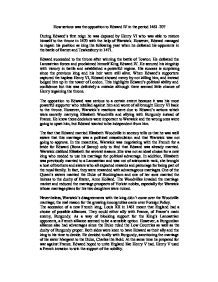 How serious was the opposition to Edward IV in the period 1461-70?

How serious was the opposition to Edward IV in the period 1461-70? During Edward's first reign he was deposed by Henry VI who was able to restore himself to the throne in 1470 with the help of Warwick. However, Edward managed to regain his position as king the following year when he defeated his opponents in the battle of Barnet and Tewkesbury in 1471. Edward succeeded to the throne after winning the battle of Towton. He defeated the Lancastrian forces and proclaimed himself King Edward IV. He secured his kingship with victory in battle and established a powerful regime. His success is surprising since the previous king and his heir were still alive. When Edward's supporters captured the hapless Henry VI, Edward showed mercy by not killing him, and instead lodged him up in the tower of London. This highlights Edward's political ability and confidence but this was definitely a mistake although there seemed little chance of Henry regaining the throne. The opposition to Edward was serious to a certain extent because it was his most powerful supporter who rebelled against him and worst of all brought Henry VI back to the throne. However, Warwick's reactions were due to Edward's actions which were secretly marrying Elizabeth Woodville and allying with Burgundy instead of France. ...read more.

Edward hoped to unite England like Henry V had. Henry V used a French invasion to win the support of the nobility. Although Edward favoured an alliance with Burgundy, Warwick thought the opposite. He spent long months negotiating with the French. When Edward decided to ally with Burgundy Warwick was humiliated, he felt isolated and betrayed. He was further inflamed with the Queen's brother, Earl Rivers, power. Also, his brother, George Neville was dismissed from his position as chancellor. Furthermore, the failure to find two powerful men for his daughters was another cause of friction between Warwick and the King. The Woodvilles had completely dominated the marriage market, and Warwick was convinced that Elizabeth had put Edward against him. By this time Warwick withdrew himself from court and decided to rebel against Edward IV. At first all went well, his plan seemed to build up a coalition of powerful forces. Warwick encouraged a rising in Yorkshire led by his steward, "Robin Redesdale" to gather popular support. Edward had left to London with limited forces and by surprise was captured in Olney by the ex-chancellor. Warwick persuaded Edward's younger brother, George, Duke of Clarence to rebel with him against the king. In defiant to Edward's wishes, Warwick married his daughter Isobel Neville to Clarence. ...read more.

Edward raised troops once more to deal with the threat of Margaret of Anjou and her son. Once again, Edward defeated his opponents, the Lancastrians once and for all. Prince Edward was killed so Edward secured his kingship with victory in battle yet again. Henry VI was killed once Edward returned to London. So this time all Lancastrian power was crushed for good. In my opinion, I don't think the opposition towards Edward was serious; he was able to deal with it and regain the throne the following year, it was just the fact that the greatest nobleman in the realm and his own brother had turned against him. However, Edward was a soldier all his life and it is highlighted when he won the Battle of Towton where he became king and then further military campaigns in 1469 and 1471 where his natural ability as a commander was confirmed. He earned the respect for the nobility and many complied with his regime. At the beginning of his reign, he dealt with the Lancastrian resistance and was safe; it wasn't until he was unexpectedly opposed by Warwick and Clarence. He was overthrown by his friends not his enemies but once they were killed he was firmly re-established in 1471 and was in a much stronger position than he had been in 1461 since Henry VI and his heir was dead and he had no one to challenge his right to the throne. ...read more.