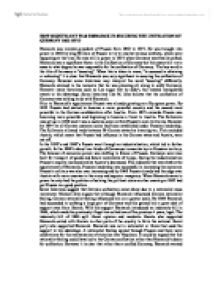 How Significant Was Bismarck In Securing the Unification of Germany 1862-1871?

HOW SIGNIFICANT WAS BISMARCK IN SECURING THE UNIFICATION OF GERMANY 1862-1871? Bismarck was minister-president of Prussia from 1862 to 1871. He was brought into power in 1862 by king William of Prussia to try to resolve various conflicts, which were happening at the time. He was still in power in 1871 when Germany was finally unified. Bismarck was a significant factor in the Unification of Germany but this essay will try to a***s to what degree he was responsible for the unification of Germany. The key word in the title of the essay is "securing". When this is taken to mean, "to succeed in obtaining or achieving" it is clear that Bismarck was very significant in securing the unification of Germany. However some historians may interpret the word "securing" differently. Bismarck claimed in his memoirs that he was planning all along to unify Germany. However many historians such as Lee argue that he didn't, but instead manipulated events to his advantage. Some historians like M. John believe that the unification of Germany was nothing to do with Bismarck. Prior to Bismarck's appointment Prussia was already growing as a European power. By 1815 Prussia had started to become a more powerful country and the second most powerful in the German confederation after Austria. From 1815 onwards Prussia was becoming more powerful and beginning to become a threat to Austria. ...read more.

However it is clear that rather than a unified Germany, Bismarck wanted to expand Prussia, but this led to the same result and the nationalist feeling made the job a lot easier. Bismarck claims in his memoirs that he wanted to unify Germany and that he was in full control of events, which indicates that he thought he was significant in securing the unification. However it is more likely that from 1862 to 1971 he just controlled events to his advantage rather than creating the m. This view is supported by S. Lemieux who said, when referring to Bismarck "He skillfully used diplomacy and alliances in pursuit of this goal". This goal was the expansion of Prussia. There are a number of events, which support this argument. Bismarck was not in control of the Hohenzollern crisis of 1868. He could not have predicted that queen Isabella of Spain would be forced to leave Spain because of a revolt. Bismarck, however was able to take advantage of this event by convincing William 1 to try to make prince Leopold accept the Spanish throne. This made Spain one of Prussia's growing list of allies. The news of this was then accidentally leaked and Napoleon III of France found out. He was not happy to hear this news as it meant that Prussia would be dominating the area around France and king William I got Leopold to withdraw. ...read more.

Bismarck also made an alliance with Italy promising Venetia for help in the event of a war. The Austro-Prussian war did eventually break out in 1866 and Prussia won with considerable ease, but Bismarck did not give France any land. Although Germany was one step closer to unification France still caused a problem. Bavaria and Wuttemburg were still under French influence. This meant that Bismarck had to exclude France as he had done with Austria. He did this by announcing that Napoleon had made demands for the territory in the Saarland. France were also unlikely to get help from Italy unless they remover troops from Rome which was not likely. Bismarck then waited for his opportunity and when France tried to take Luxemburg, Bismarck opposed. France received no support and a conference took place to resolve the problem. Luxemburg was guaranteed its independence and France was very much isolated. Then Bismarck used this to his advantage by having a war, which he did through the Ems telegram. This essay has shown that Bismarck did not create events but was successful at using them to his advantage. He managed to isolate both Austria and France which were important factors in the unification of Germany. It is clear that the unification of Germany was not just down to Bismarck as he was already in a good situation when he first came to power. Bismarck was also successful in increasing nationalist feeling in the years when he was in power. ...read more.