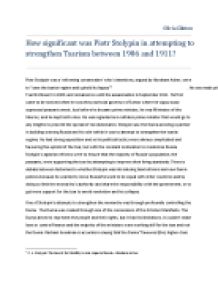 How significant was Piotr Stolypin in attempting to strengthen Tsarism between 1906 and 1911?

﻿Olivia Clinton ________________ How significant was Piotr Stolypin in attempting to strengthen Tsarism between 1906 and 1911? ________________ Piotr Stolypin was a ?reforming conservative? who?s intentions, argued by Abraham Asher, were to ?save the tsarist regime and uphold its legacy?[1]. He was made prime minister of Russia by Tsar Nichloas II in 1906 and remained so until his assassination in September 1911. He first came to be noticed when he was the provincial governor of Sartov where he vigourously supressed peasant unrest. Just before he became prime minister, he was Mininster of the Interior, and he kept both roles. He was regarded as a ruthless prime minister that would go to any lengths to prevent the spread of revolutionaries. Stolypin saw the Duma as being a partner in building a strong Russia and his role within it was to attempt to strengthen the tsarist regime. He had strong opposition and so his political tactics were always complicated and favouring the uphold of the tsar, but with the constant motivation to modernise Russia. Stolypin?s agrarian reforms were to ensure that the majority of Russia?s population, the peasants, were supporting the tsar by attempting to improve their living standards. ...read more.

Robert Service says that he didn?t really ?revoke the October Manifesto?[14] in the speech, but this could be that Stolypin was carried away by that many of the Third Duma deputies were either conservative or aristocratic or both. In this speech he tried once again to get the Duma to pass the legislation confirming the agrarian reforms, suggesting that he was truly enthusiastic in enforcing them to help the peasantry. However, the was no fail to notice his renewed emphasis, right at the beginning of the speech, on governments intentions to use force to put down unrest by the ?foes of society[15]?, perhaps referring to the extremists to the left. The new Duma was perhaps more conservative which could have been why the members were more open to listening to him, a speech Stolypin made nine months earlier On March 6th 1907 had the same substance and tone but was met with harsher criticism. However it made Stolypin extremely popular with, according to V.V Shulgin a right wing deputy; ?[t]he army, the bureaucracy, the police and every citizen who didn?t want a revolution?[16] because of two significant words Stolypin said towards the end of his speech; ?Not afraid[17].? Stolypin?s agrarian reforms were ...read more.