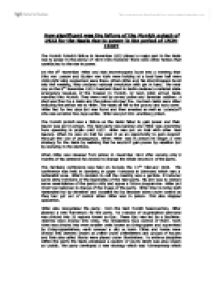 How significant was the failure of the Munich putsch of 1923 for the Nazis rise to power in the period of 1924-1933? The Munich Putsch's failure in November 1923 played a major part in the Nazis rise to power in the period of 1924-1933 however there were other factors that contributed to the rise in power. On the 8th November Hitler and 600 stormtroopers burst into a meeting that Otto von Lossow and Gustav von Kahr were holding at a local beer hall were 2000 right wing supporters were there. When Hitler and his stormtroopers burst into the meeting, they declared national revolution with gin in hand. The next day on the 9th November 1923 President Ebert in Berlin declared a national state emergency because of the treason in Munich. At noon 2000 armed Nazis marched into Munich. They were met by armed police and Bavarian soldiers. ...read more.

The Bamberg conference was held on Sunday the 14th February 1926. The conference was held in Bamberg in upper Franconia in Germany which was a nationalist area. Hitler's decision to call the meeting was a gamble. It included some sixty members of the leadership of the n**i party. His aim was to restore some resemblance of the party unity and agree a future programme. Hitler put Ernst Von Salomon in charge of the image of the party. Hitler tried to bring both Nationalist led by Streicher and Socialist led by Strasser sides under control as they had got out of control when Hitler was in prison. This also stopped opposition. Hitler also reorganised the party. From the n**i Munich headquarters, Hitler planned a new framework for the party. For reasons of organisation Germany was divided into 35 regions known as Gau. These Gau was led by a Gaulieter. ...read more.

This helped the control grow from strength to strength as they could censor what then people heard and did. The SA was under the new leadership of Franz Von Salomon. It was used to cease street hooligans and to spread n**i propaganda and organising demonstrations against Jews and Communist. The SA also known as the stormtroopers/Brown shirts were reduced in numbers to create the SS which were known as the Black shirts in 1926. The SS was Hitler's bodyguard service which was an elite force. In 1929 Heinrich Himmler became its leader. It was used to protect Hitler and gain support. In conclusion the Munich Putsch's failures was significant in the Nazis rise to power in the period of 1923-1933, however there were other factors that contributed to the rise in power like the Bamberg conference of 1926, the party organisation, the SA and SS and the use of propaganda. However it can be said that these other factors may not have happened if it wasn't for the failures of the Munich Putsch in 1923 and Hitler going to prison. ?? ?? ?? ?? ...read more.