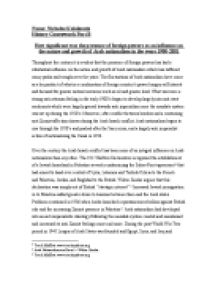 ﻿Name: Nicholas Kalakoutis History Coursework Part B How significant was the presence of foreign powers as an influence on the nature and growth of Arab nationalism in the years 1900-2001 Throughout the century it is evident that the presence of foreign powers has had a substantial influence on the nature and growth of Arab nationalism which has suffered many peaks and troughs over the years. The fluctuations of Arab nationalism have come as a by product of what is a combination of foreign country?s power hungry self interest and demand for greater natural resources such as oil and greater land. What was once a strong anti-ottoman feeling in the early 1900?s began to develop largely into anti west sentiments which were largely geared towards anti imperialism once the mandate system was set up during the 1920?s. Moreover, after conflict between borders and a continuing anti Zionist affection shown during the Arab Israeli conflict, Arab nationalism began to rise through the 1950?s and peaked after the Suez crisis, and a largely anti imperialist action of nationalising the Canal in 1956. Over the century the Arab Israeli conflict has been more of an integral influence on Arab nationalism than any other. ...read more.

Consequently, tensions rose and Arab nationalism became anti imperialist and anti west due to the burden they had placed on the Arab nations. The creation of independent states was however an ??important issue in the decolonization process,?? [12] which would have affect in the long term removal of European power in the Middle East. However, the border disputes also took place amongst the Arabs themselves and great distrust began to emerge, as was evident when Iraq invaded Kuwait after a border dispute over oil in 1980. The Kuwaiti Government had hoped to force Mr. Hussein to the bargaining table, and negotiate a border truce and a non-aggression pact. Instead, Iraqi troops invaded Kuwait driving its ruling family into exile. Henry M. Schuler, states that from the Iraqi viewpoint, the Kuwait Government was ''acting aggressively - it was economic warfare.''[13] Moreover it can be argued that if not for leaders such as that of Kuwait and Hussein himself, these disputes may never have occurred. Further influence on Arab nationalism has been the ?Superpower? statuses of USSR and the U.S.A. In response to the U.S.A?s refusal to fund Nasser?s plan to build the Aswan High Dam, he nationalised the Suez Canal in 1956[14]. ...read more.