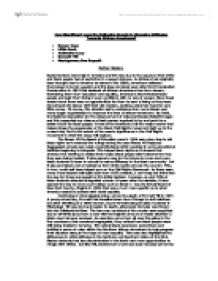 How Significant Were Events in Changing Attitudes Towards African-Americans?

How Significant were the Following Events in Changing Attitudes Towards African-Americans? * Brown Case * Little Rock * Autherine Lucy * Emmett Till * Montgomery Bus Boycott Bethan Siddons Racial tensions were high in America and this was due to the exposure that white and black people had of eachother in unequal statuses. As Africans had originally been brought over to America as slaves in the 1800s, Americans believed themselves to be far superior and this idea remained even after the Emancipation Proclamation in 1863 that declared all African-Americans free from slavery. Restricting them from education and equality, Americans discriminated black people and kept them living in poor conditions with no way of escape. Many freed slaves found there were no opportunities for them to earn a living so they were forced back into labour with their old masters, working extremely hard for very little money. Of course, this situation led to resistance from some blacks and many began organisations to improve the lives of African-Americans. By 1909, the National Association for the Advancement of Coloured People (NAACP) began and this supported any chance a black person acquired to try and push for a better future for black people. ...read more.

Till's mother demanded he had an open casket to display to all the horrors of what this 14 year old boy had been through. The murderers later confessed their crime to a newspaper many years later but were never prosecuted, black organisations made sure this would never happen again. Once again, this incident helped to spur on the beginning of the most important movement in black civil rights. It was indeed only three months after the case of Emmett Till that the Civil Rights Movement began brandishing African-Americans new secret weapon, Martin Luther King. It all started when a black woman, Rosa Parks, refused to move from her seat, in the still segregated buses, for a white person. She was thrown off and fined but she turned to help from the NAACP in the hopes of finishing segregation once and for all in the South. Martin Luther King held meetings in the local church of Montgomery and it was decided that a one day boycott of the buses would be demonstrated. It was a great success so the church decided unanimously to continue with it until they got what they deserved, equality on buses and other transport. ...read more.

These incidents were bound to increase sympathy and respect for black people. These changes in attitude occurred because every event mentioned, raised awareness on the plight of black rights all over the world. Some of the episodes also broke boundaries for black rights such as the Montgomery Bus Boycott which proved for the first time that blacks had the power to change rules using peaceful protesting. However, the significance of all these events is limited as Autherine Lucy showed when she couldn't even attend a university despite the fact that integration was being encouraged. These events did only change attitudes slowly in the US as the racial hatred ran deep down anyway, so that demonstrates just how limited these significances would be. But I think it is best summed up with one of the teenage girls from Little Rock who, after only a short amount of time being in an integrated school, had changed her mind completely on the issue of r****m. Claiming that she blamed parents for the continued racial hatred in the country and saying that all Americans should be equal - attitudes most certainly changed. ...read more.