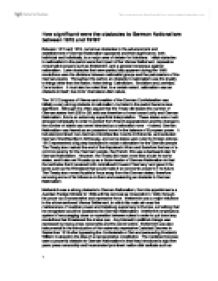 How significant were the obstacles to German Nationalism between 1815 and 1919?

How significant were the obstacles to German Nationalism between 1815 and 1919? Between 1815 and 1919, numerous obstacles to the advancement and establishment of German Nationalism appeared and their significance, both individual and holistically, is a major area of debate for historians. Initial obstacles to nationalism in the period were the impact of the Vienna Settlement, repressive conservative powers such as Metternich, and a general consensus against nationalism. Later obstacles that were particularly apparent during the 1848 revolutions were the divisions between nationalist groups and the paricularism of the German people. Throughout the period, an obstacle to nationalism was the loyalty to things other than the nation, these being: Catholicism, Socialism and, perhaps, Communism. It must also be noted that, to a certain extent, nationalism was an obstacle to itself, due to its 'chameleon-like' nature, The 1815 Congress of Vienna and creation of the German Confederation was initially a very strong obstacle to nationalism, but later in the period became less significant. Although it is often argued that the Treaty did lessen the number of German states from 350 to 39, and was therefore a move toward unity and German Nationalism, this is an extremely superficial interpretation. ...read more.

An obstacle to German Nationalism that was consistently active up to World War One was the loyalty of the German people to their individual states. Particularism was particularly evident in the pre-unified Germany, in which the German people did not generally consider themselves 'Germans'. For example, a Bavarian would consider themselves a 'Bavarian' and not a 'German'. This attitude was also present with the rulers of the individual German states who jealously guarded their sovereignty and blocked even modest moves toward the strengthening of common bonds. This loyalty to the state and the state's self-protection meant that nationalist feeling was difficult to cultivate. However, most German states still entered into the Zollverein at some point, thus showing that they were not totally unwilling to accept some form of political unity - though the Zollverein was by no means set up initially as a form of political unity and few states joined it during its initial stages, but it did come to represent a sort of political union between German states and those that joined it at a later date were aware of this, the states were also clearly prepared to accept economic nationalism. ...read more.

The proximity of Germany to Russia made Communism a distinct danger, it must also be noted that the most prominent Marxists of the time, Marx and Engels, were German. However, the perpetual fear of Communism evident in Germany through the later part of the period meant that Communism was not a significant danger to German Nationalism. The obstacles to German Nationalism were much more significant in the earlier part of the period than the later one of the late 19th Century onwards. During the early 19th Century, there were numerous physical obstacles to German Nationalism, such as Metternich and the Treaty of Vienna, which were not in effect later in the period. The divisions between German Nationalists were also, to a certain extent, overridden between 1870 and 1918 - though they did emerge again after the German defeat and the Treaty of Versailles. The obstacles to nationalism that occurred in Germany after 1870 were more intangible than they had been previously, and mostly consisted of a drawing away of loyalties from the state - and not always effectively so. These obstacles were much less significant than they had previously been. 1 ...read more.