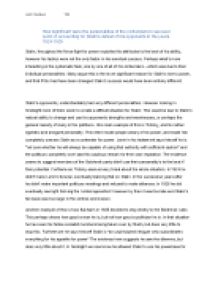 ﻿Josh Chambers Y39 How significant were the personalities of the contenders to succeed Lenin in accounting for Stalin?s defeat of his opponents in the years 1924-1929 Stalin, throughout the fierce fight for power exploited his attributes to the best of his ability, however his tactics were not the only factor in his eventual success. Perhaps what?s more interesting is the systematic fails, one by one of all of his contenders ? which was due to their individual personalities. Many argue this is the more significant reason for Stalin?s rise to power, and that if this had have been changed Stalin?s success would have been entirely different. Stalin?s opponents, understandably had very different personalities. However looking in hindsight none of them seem to create a difficult situation for Stalin. This could be due to Stalin?s natural ability to change and use his opponents strengths and weaknesses, or perhaps the general naivety of many in the politburo. One main example of this is Trotsky, and his rather egotistic and arrogant personality. This intern made people weary of his power, and made him completely oversee Stalin as a contender for power. Lenin in his testament says himself he is ?not sure whether he will always be capable of using that authority with sufficient caution? and the politburo completely over saw this cautious remark for their own reputation. The evidence seems to suggest members of the Bolshevik party didn?t use their personality?s to the best if their potential. ...read more.

Furthermore his ability to switch ideologies and allies is a testament to his versatile personality. An example of this is in the later stages of the struggle, when only him and Bukharin were left for the job. Stalin suddenly rejected NEP because it was failing and turned radically left. This sudden maneuver allowed left wing supporters and nationalist war communists to support him, as well as gaining the support of anti NEP politicians. In all this he managed to leave Bukharin to pick up the pieces of NEP. Furthermore Stalin re introduced grain requisitioning in early 1928 to make sure NEP was a complete fail. Its these quite brilliant tactics that formulate into a plan that make Stalin truly versatile and incredibly shrewd and devious. In everything Stalin did there always seemed to be a very formulated plan, and in this was surrounded by brilliant political tactics. However these tactics were merely ways of getting rid of political opponents, and due to personalities as whole, arguably tactics are not as important as other factors. Alternatively the power bases? of other opponents could be as significant as personality in the war struggle for power, and the defeat of all his opponents. All Stalin?s opponents had important roles within the Bolshevik party, and in many ways ? more significant roles than Stalin. One in particular is Trotsky. ...read more.

On one hand it seems Stalin?s powerbase seems to be the primary factor, that despite anyone?s efforts his place within government allowed to build a vast fan base in such a short amount of time. Furthermore others power base didn?t seem to match the superiority of his, even though on the forefront they seem more important, Trotsky is a prime example of this. On the other hand his tactics seem the obvious significant factor ? looking at how he manipulated allies and oppositions, such as Bukharin and Zinoviev. More over his ability to control the politburo with his allies over the testament suggests that this could have been a primary turning point for Stalin?s direction on how to achieve power. However diving into the muddle of linked causes, personalities seems to come out on top. The tactics and moral high ground was generally taken by his opposition, but it seems they didn?t play hard enough. They didn?t morally want to use underhand tactics and switch ideologies ? because they believed in what they were fighting in. It?s this decorum that contributed more than anything else. Looking at the other side of the spectrum Stalin?s fierce personality, with no conscience seems to be the perfect mix to manipulate not only the communist party ? but the general public as well. It is this sheer inhumane ability to be deceptive in this way that allows the evidence to suggest, on the top, personality is the most significant factor in accounting for Stalin?s defeat of his opponents in the years 1924-1929. ...read more.