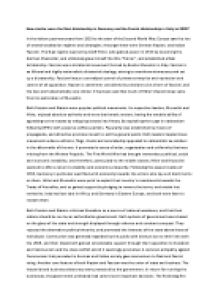 ﻿How similar were the Nazi dictatorship in Germany and the Fascist dictatorship in Italy to 1939? In the violent post-war years from 1919 to the start of the Second World War, Europe saw the rise of several totalitarian regimes and ideologies. Amongst these were German Nazism, and Italian Fascism. The Nazi regime was led by Adolf Hitler, who gained power in 1933 by becoming the German Chancellor, and ultimately gave himself the title ?Fuhrer?, and established a Nazi dictatorship. Fascism was a dictatorial movement formed by Benito Mussolini in Italy. Fascism is an illiberal and highly nationalistic dictatorial ideology, aiming to overthrow democracy and set up a dictatorship. Fascism favours centralized control of private enterprise and repression and control of all opposition. Nazism is sometimes considered by scholars to be a form of fascism, and the two are fundamentally very similar. It has been said that much of Hitler's fascist ideas came from his admiration of Mussolini. ...read more.

Communism was generally regarded by the public with distrust due to their links with the USSR, and their ideals both gained considerable support through their opposition to Socialism and Communism and the class conflict which it seemingly promoted. A common antipathy against Communism that pervaded in German and Italian society gave momentum to Nazi and Fascist rising. Another core feature of both Nazism and Fascism was the union of state and business. The industrial and business aristocracy were protected by the government. In return for running the businesses, the government ultimately had control over important decisions. The Reichstag fire in Germany and the issue of a formal decree banning all other political parties in Italy in 1926 destroyed the parliamentarian machinery completely in the two countries In regards to domestic policies, Nazism and Fascism both employed methods to control their people. The Nazis made use propaganda mastermind Joseph Goebbels to spread their ideology and beliefs. ...read more.

The monarchy and Catholic Church was retained, and civil servants and local police still remained powerful factors in Italian life. This contrasts with the extent to which Hitler changed Germany society under his total authoritarian regime. By becoming Fuhrer, he was the sole and unchallenged leader of the State. Nazis took control of local government, labour, education, the youth and the army, who swore an oath directly to the Fuhrer. Other groups, such as the Church and the industrialists retained their influence, but under Nazi leadership. Before 1939, Hitler had shaped Germany into a war machine. He made rearmament a priority, and had an aggressive foreign policy. Despite Mussolini?s bluster, he did little to prepare Italy for war. Though his aims were to acquire territory, he was hesitant to use force. Italy was therefore totally unprepared for the Second World War. In conclusion, Nazi dictatorship in Germany and the Fascist dictatorship in Italy shared more similarities than differences. Hitler?s Nazism was certainly more extreme than Mussolini?s Fascism, and emphasized racism as a policy. However, it is important to note that both systems shared the same fundamental ideology of dictatorship. ...read more.