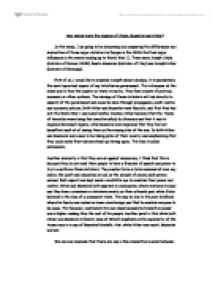 How similar were the regimes of Stalin, Mussolini and Hitler?

How similar were the regimes of Stalin, Mussolini and Hitler? In this essay, I am going to be discussing and comparing the differences and similarities of three major dictators in Europe in the 1930s that had major influences in the events leading up to World War II. These were Joseph Stalin (dictator of former USSR), Benito Mussolini (dictator of Italy) and Adolph Hitler (dictator of Germany). First of all, I would like to examine in depth about ideology. It is undoubtedly the most important aspect of any totalitarian government. ...read more.

dignity, while Mussolini was disgraced that they had not benefited much at all seeing them as the winning side of the war. So both Hitler and Mussolini were seen to be taking pride of their country and emphasizing that they could make their nations stand up strong again. This idea is called nationalism. Another similarity is that they are all against democracy. I think that this is because they do not want their people to have a freedom of speech and power to try to overthrow these dictators. They wanted to be in total command of over any media, the youth and education as well as the amount of money each person earned. ...read more.

This may be due to his poor childhood where his family was ranked as lower class beings, and that he wanted everyone to be equal. This however, contradicts his own ideas because he himself as leader was a higher ranking than the rest of his people. Another point is that while both Hitler and Mussolini is fascist, none of Hitler's emphasis on the superiority of the Aryan race is in any of Mussolini's beliefs. Also, while Hitler was r****t, Mussolini was not. We can now conclude that there are only a few similarities overall between all three dictators, which are that they all oppose to democracy because of their crave for power and that they all come from a poor background, which partially affects Stalin's ideology of Communism. ...read more.