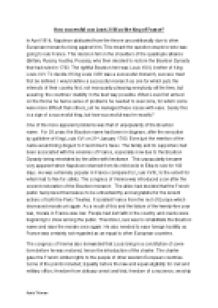 How successful was Louis XVIII as the King of France?

﻿How successful was Louis XVIII as the King of France? In April 1814, Napoleon abdicated from the throne unconditionally due to other European monarchs rising against him. This meant the question erupts to who was going to rule France. This decision fell on the shoulders of the quadruple alliance (Britain, Russia, Austria, Prussia), who then decided to restore the Bourbon Dynasty that had ruled in 1793. The rightful Bourbon heir was Louis XVIII, brother of King Louis XVI. To decide if King Louis XVIII was a successful monarch, success must first be defined. I would define a successful monarch as one for which puts the interests of their country first, not necessarily pleasing everybody all the time, but assuring the countries? stability in the best way possible. When Louis first arrived on the throne he had a series of problems he needed to overcome, for which some were more difficult than others, yet he managed these issues with ease. Surely this is a sign of a successful king, but how successful was he exactly? One of the more apparent problems was that of unpopularity of the Bourbon name. For 20 years the Bourbon name had been in disgrace, after the execution by guillotine of King Louis XVI on 21st January 1793. Even just the mention of the name would bring disgust to Frenchmen?s faces. ...read more.

All these issues needed to dealt with smoothly and efficiently. Louis had various options available to him; it was merely a matter of selecting the correct procedures, many of which had an impact on multiple issues. It would have been far easier for Louis to choose to side with his extreme ultra royalist supporters who had won a large majority at the elections held for the Chamber. They used this opportunity and power to take revenge and execute some Bonapartist Generals, known as the ?White Terror?. This amongst other things, this caused a Bonapartist uprising at Grenoble in May 1816. At this point realised this had potential of causing a national uprising. The king was far more moderate than the ultra royalists as he realised France could not return back to the ?Ancien Regime?. He therefore decided to dissolve the chamber in the hope that a more moderate group would get in. This was a crucially intelligent move, as in the next election the more moderate Royalist Constitutionalists won the majority. This helped the reestablishment of the Bourbon name as the majority of France supported this decision. At this time, the organisation of the French finances was beginning to take shape on a sound basis due to the expertise of Baron Louis and Count Corvetto. ...read more.

In a book written by Philip Marsell about the king, stated ?Louis XVIII, not Louis XIII, as is often said, was the last king of France for whom his people mourned?. The statement alone clarifies just how Louis had managed to win over the respect of the country, from practically being a detested outsider to becoming a beloved King. The book also comments how ?the throne had never been more secure?. This shows just how the King and the decisions he made had changed what could only be classified as a country of political instability to one for which there was no question who should rule the country in the future. At the beginning of this essay I defined a successful king as ?as one for which puts the interests of their country first, not necessarily pleasing everybody all the time, but assuring the countries? stability in the best way possible.? This is very true of King Louis XVIII. He could never please both the liberals and the Ultras, yet he made decisions that allowed France to recover from the Napoleonic wars and gain the structure and stability that had been lacking in the previous 20 years. Not only did his actions improve the country financially and politically, he became a King for which the country was proud to have and sad to see go, despite the history of the Bourbon Dynasty. Katie Tiltman ...read more.