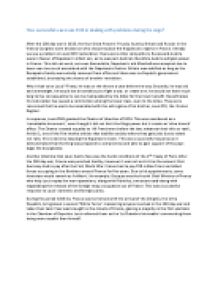 How successful was Louis XVIII in dealing with problems during his reign?

﻿How successful was Louis XVIII in dealing with problems during his reign? After the 100 day war in 1815, the four Great Powers- Prussia, Austria, Britain and Russia- in the Vienna Congress were divided on who should replace the Napoleonic regime in France. Already we see a problem in Louis XVIII restoration: there were other competitors, Russia and Austria were in favour of Napoleon?s infant son, as he was part Austrian therefore Austria will gain power in France. This did not work, not even Bernadotte, Napoleon?s old Marshall was accepted due to been seen too much associated with the Napoleonic faction. ...read more.

Nevertheless his restoration has caused a commotion among the lower class, even to the Allies. They were concerned that he was to be associated with the old regime of his brother, Louis XVI, the ?Ancien Regime?. In response, Louis XVIII granted the Charter of Liberties of 1814. This was considered as a ?remarkable document?, even though it did not limit the Kings power but it create an ?olive branch? affect. The Charter created equality to ?All Frenchmen before the law, whatever their title or rank?, Article 1, one of the first twelve articles that stabilise society where they gain jobs due to talent not rank, this is done by keeping the Napoleonic Code . ...read more.

Due to his appointments, some historians would remark as ‘brilliant’, for example: Decazes was the fourth Chief Minister of France who help Louis repay the war reparations, along with Richelieu, two years early along with negotiating the removal of the foreign troop occupation out of France. This was a successful response to Louis’ domestic and foreign policy. During the period 1815-16, France was terrorised with the arrival of the émigrés, the Ultra Royalists, bring about a second ‘White Terror’ massacring anyone involved in the 100 day war and taken their land. Fear was brought to the streets of France, gaining a majority in the first elections in the Chamber of Deputies. Louis referred them as the ‘La Chambre Introvable’ commenting them being more royalist than himself. ...read more.