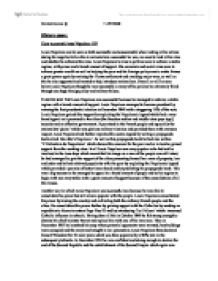 How successful was Napoleon III?

History essay: How successful was Napoleon III? Louis Napoleon can be seen as both successful and unsuccessful when looking at his actions during his reign but to be able to evaluate how successful he was, we need to look at his aims and whether he achieved his aims. Louis Napoleon's aims in politics were to achieve a stable regime, with power and a broad amount of support. His economic and social aims were to achieve greater wealth as well as helping the poor and his Foreign policy was to make France a great power again by revising the Vienna settlement and avoiding major wars, as well as this he also supported and wanted to help introduce nationalism. Overall as will be seen below Louis Napoleon though he was successful in many of his policies he ultimately failed through one huge foreign policy and military failure. It can be seen that Louis Napoleon was successful because he managed to achieve a stable regime with a broad amount of support. Louis Napoleon managed to become president by winning the first presidential election in December 1848 with a staggering 75% of the vote. Louis Napoleon gained this support by exploiting the Napoleonic legend which had a very broad appeal as it promised to the elites (the Bourbon nobles and middle class pays legal) security and an effective government. It promised to the French people and especially the nationalists 'gloire' which was glorious military victories and provided them with overseas respect, Louis Napoleon had further exploited his uncles legend by writing a propaganda book called 'des id�e's Napoleon.' ...read more.

This cheap credit was used in several different areas such as the construction of the Suez Canal and the setting up of railways. The setting up of railways meant that there was a high demand of iron and steel which boosted their industries as they were needed for building the tracks. Railways also helped all other industries and business as it meant that transport costs were kept low. As well as this Napoleon also set up huge urban renewal designs run by Baron Haussmann where order and grandeur were the main priorities especially in Paris, Lyon and Marseilles. Consequently because of these economic and social schemes Napoleon did partly manage to fulfil his aims of achieving greater wealth through his supply of cheap credit; however as will be seen he did not manage properly help the poor through his urban renewal schemes. Again Napoleon III foreign policy in part was successful as through the Crimean war France's national standing improved and through the unifying of Italy Austria was weakened and the Vienna settlement was broken. In 1854 Napoleon III disagreed with Russia by supporting France's claim to be protector of Catholics in the Turkish Empire and claimed that the Catholics, not the Greek Orthodox Church (supported by the Russians), should control the Holy Places in Palestine. Napoleon however was out of control, thus when the Sultan provoked Russia into attacking France found herself at war with Russia. However Napoleon III knew that he would not lose as he was supported by the other major powers who did not want to see Russia strengthened further and especially by Britain who did not want Russia threatening India or having access to the Mediterranean. ...read more.

France's armies mobilised slower than Prussia's and so instead of marching on Berlin, France ended up defending herself. After a series of defeats Napoleon surrendered at Sedan and was taken prisoner. Thus because France had alienated the other powers such as Britain, Russia, Italy and Austria the Second Empire was ended and the Third Republic was formed to fill the void. This was the biggest and most significant failure which was the cause for the downfall of him and his regime, because he allowed himself to be provoked and defeated by a superior military power. In conclusion the evidence suggests that Napoleon was sufficiently successful because he did manage to achieve his aims of setting up a stable regime, with power and support as there was no revolution at the time of his capture. Napoleon's economic and social policies were partly successful as he did manage to obtain greater wealth, however through doing this one of the banks he set up went into bankruptcy and as well as this there ultimately was no structural change or increase in the efficiency of production. Napoleon's foreign policy was mostly a failure because although he succeeded with the Crimean war and the nationalisation of Italy he had lost control in both situations which was the case in all of his other foreign policies. In the case of the Franco-Prussian war the loss of control was the most significant and only real cause for defeat which in perspective was Napoleon's only real considerable failure which did cause his downfall. ?? ?? ?? ?? Daniel Moore (j) 11/09/2008 ...read more.