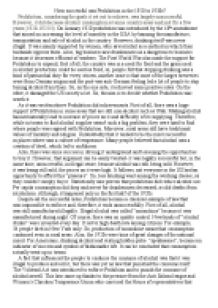 ﻿How successful was Prohibition in the 1920 to 1930s? Prohibition, considering the goals it set out to achieve, was largely unsuccessful. However, it did decrease alcohol consumption at some country areas and just for a few years (1920-1922/3). On January 1920 prohibition was introduced by the 18th amendment that aimed on increasing the level of morality in the USA by banning the manufacture, transportation and sale of alcohol in the country. However, drinking itself was never illegal. It was mainly supported by women, who saw alcohol as a method in which their husbands oppress them. Also, big business saw drunkenness as a dangerous to business because it decreases efficient of workers. The First World War also made the support for Prohibition to expand, first of all, the country was in a need for food and the grain used in alcohol production could be used as food, so, people felt that stopping drinking was a kind of patriarchal duty for every ...read more.

Many people believed that alcohol was a creation of devil, which led to sinfulness. Also, there was some success in driving it underground and lessening the opportunities to buy it. However, that argument can be easily twisted- it was legally successful but, in the same time, unsuccessful, in illegal sense, because alcohol was still being sold. However, it was being still sold, the prices on it were high. It follows, not everyone in the US had an opportunity to afford this ?pleasure?. So, less drinking went among the working classes, as they couldn?t simply buy it. Statistically was proven that prohibition did reduce alcohol use. Per capita consumption did drop and arrest for drunkenness decreased, as did deaths from alcoholism. Although, it happened only in the first half of the 1920s. Despite all the successful sides, Prohibition became a classical example of law that was impossible to enforce and, therefore, it ends unsuccessfully. First of all, alcohol was still manufactured illegally. ...read more.

This law came up thanks to the pressure from the Anti Saloon league and Women?s Christian Temperance Union who conviced the House of representatives that liquor was connected with special interests and that it was causing affliction, in general, the US citizens just wanted a ?good change? after the war. However, the main factor why Prohibition failed is the rise of gang culture and illegal liquor business, which meant that Prohibition actually created a crime industry. The police was being influenciated as well, it was really easy for the gangsters to control the police and politicians through corruption. When an honest police which really persecuted gangster was introduced in Chicago, it led to a big war between both. Even though a lot of public bodies were created to stop the consume of alcohol, it was not possible for them to actually fulfill this task, ultimately, it was president Franklin D. Roosevelt who end up with Prohibition, so, we could conclude that even though it worked in some small areas, Prohibition failed and just arose crime at that time. ...read more.