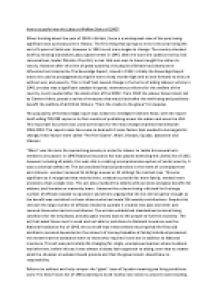 How successful was the Labours Welfare State of 1945?

﻿How successful was the Labours Welfare State of 1945? When thinking about the year of 1945 in Britain, there is a widespread view of the year being significant and a pivotal point in History. The first thing that springs to mind is the year being the end of 6 years of total war. However in 1945 much more began to change. The country shocked itself by electing a landslide Labour government in 1945, after the war time coalition led by rival conservatives, leader Winston Churchill, a man that was seen to have brought the nation to victory. However after this time of great austerity, the people of Britain had clearly been influenced and inspired by The Beveridge Report, issued in 1942. Initially the Beveridge Report was to be used as propaganda during the war to keep morale high and to look forward to a future without war, and poverty. This in itself had caused change in the terms of aiding Labours victory in 1945, yet also was a significant catalyst for great, momentous reforms for the welfare of the country, much needed after the destruction of the WW2. From 1945 the Labour Government led by Clement Atlee, passed a series of measures that would look after the well-being and positively benefit the welfare of all British Citizens, ?from the cradle to the grave? for decades. ...read more.

This act was particularly life changing for single, unemployed women whose husband had left them, before this act it was almost a laissez faire approach to aiding, seen that no matter what the situation a husband should provide and that the government should take no responsibility. Reforms to address and help conquer the ?giant? issue of Squalor meaning poo living conditions were: The New Towns Act of 1946 planning to build twelve new towns to prevent overcrowding, this a key issue in living conditions being poor. Another act was passed, the Housing Act 1949 this enabled governments to buy houses in dismay, and make repairs so that the house could be inhabited again, combatting homelessness. Home owners could also apply for their house to be improved if it is in disrepair. To battle the issue of ?ignorance? of lack of education, the labour government enforced the Education Act of 1944 this increased the age of free education from 14, to 15 meaning especially the working class, who is times past were seen as the simple minded class, were able to receive education for another year without having to pay more than they can afford. The act also meant that all local authorities had to provide, primary, secondary and further education. Many were concerned that academic education would be harmed by combining it with less academic subjects and children, however this was an extremely ignorant view in ...read more.

Yet this revelation being the NHS encouraged the development of old hospitals and the building of new ones. The pricing of dentistry, and optical treatment, was a very small price to pay for in return a whole host of free health care services, these were small criticisms considering that people had to pay for all health care before the NHS anyway. The Labour set out to provide social security and tackle the problems posed by post-war Britain, and considering the austerity levels in 1945, they certainly did what they intended to. Despite criticisms of only developing acts that had already been passed, the government were successful in doing so and the bases of their very welfare state, did not try to state that they were pioneers, ?The scheme is in some ways a revolution but in more ways a natural development from the past.? Beveridge Report The Welfare Reforms were carefully organised and thorough, for example the apparent failures of the National Insurance Act being that it did not cover those who did not pay in, was supplemented by other acts such as the National Assistance Act. The NHS is still recognised today as one of the greatest reforms our country has ever provided, and has continued to provide free health care for over 60 years since the act was passed, due to this one factor alone, Britain entered its ideal of New Jerusalem thanks to the Labour Government and the Beverige Report. ...read more.