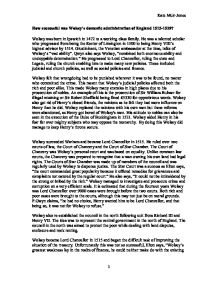 How successful was Wolsey's domestic administration of England 1515-1529?

How successful was Wolsey's domestic administration of England 1515-1529? Wolsey was born in Ipswich in 1472 to a working class family. He was a talented scholar who progressed from being the Rector of Limington in 1500 to being Henry VIII's highest advisor by 1514. Giustininani, the Venetian ambassador at the time, talks of Wolsey's "vast ability". Qwyn also says Wolsey, "combined both enormous ability and unstoppable determination." He progressed to Lord Chancellor, ruling the state and Legate, ruling the church enabling him to make many new policies. These included judicial and church policies, as well as social policies and finance. Wolsey felt that wrongdoing had to be punished wherever it was to be found, no matter who committed the crime. This meant that Wolsey's judicial policies affected both the rich and poor alike. This made Wolsey many enemies in high places due to his prosecution of nobles. An example of this is the prosecution of Sir William Bulmer for illegal retaining or Sir Robert Sheffield being fined �5330 for opprobrious words. Wolsey also got rid of Henry's closed friends, the minions as he felt they had more influence on Henry than he did. Wolsey replaced the minions with his own men but these reforms were abandoned, as Henry got bored of Wolsey's men. His attitude to nobles can also be seen in the execution of the Duke of Buckingham in 1521. ...read more.

These loans bought in about �350,000 but they caused resentment, as Henry himself did not go to war with France. In 1523 more money was needed for the expedition to France. Wolsey went to parliament and demand a subsidy of four shillings the pound, which would have given him �800,000. After a stormy and prolonged session, parliament granted two shillings in the pound spread out over a number of years. Edward Hall said that in the commons there was " a marvellous obstinate silence" Elton and Gwyn oppose each on whether Wolsey was successful or not. Elton claims it was not a successful plea to parliament, as he doesn't get al the money he desires. Gywn thinks it was "a model for all future Tudor acts" as it taxed 90% of households and Wolsey negotiated well considering he had already asked for a subsidy in 1522. In 1525 Wolsey tried to impose another levy called 'the Amicable Grant' to supplement the revenue by an arbitrary forced loan for all men with goods and property. Elton claims the collectors were far too busy collecting the 1522 and 1523 subsidies to collect a new levy. Also, Elton says there was, "no prospect of loan-money being repaid." The amicable Grant was supposed to help war with France and to exploit Pavia by raising �500,000 from the laity alone. ...read more.

Members of an infected were made to carrying a white stick when outside as a side to others to stay away. Economically he tried to organise the country after a bad harvest in 1518 to fix the price of poultry, and investigate the lack of other meats in London. In order to clear up the streets he purged vagabonds, criminals and prostitutes in 1519. Wolsey also licensed beggars and sent the sick on the street to hospitals. Between 1515 and 1529 Cardinal Wolsey had vast responsibilities in the English court. He was chief advisor to the king and basically had the last word below the king on finance, religion and law. It appears that Wolsey had strengths and weaknesses. Elton claims that foreign affairs and the judicial system came first with Wolsey and church reform and finance were definitely last. Wolsey was successful with short-term domestic issues, such as social and economic problems but less successful with long term problems like church and finance. By closing down a few monasteries and distancing the church from Rome he weakened the church. This made it less able to stand up to the problems it would later face, after his fall. Wolsey also did not have much success with money, he was not very thrifty and ambitious foreign policies always left the treasury low. Elton sums it up writing, " He tried to do the work of ten men, and not surprisingly failed. ...read more.

This essay has its strength in the knowledge and understanding of the policies of Wolsey, and there is a good range and depth to the examples given. The essay lacks sustained analysis and some time loses sight of the issue. If the argument had been set up clearly at the beginning this would have helped to structure the whole essay. ***