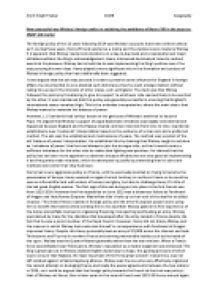 How successful was Wolseys foreign policy in satisfying the ambitions of Henry VIII in the years to 1526?

﻿Amrit Singh Thabal 16MB Geography How successful was Wolsey?s foreign policy in satisfying the ambitions of Henry VIII in the years to 1526? (24 marks) The foreign policy of the 12 years following 1514 was Wolsey?s accounts have been written almost as if, during these years, Henry VIII only existed as a stamp and the decisions were made by Wolsey. It is apparent that Wolsey made most decisions on a day-to-day basis and occasionally took major initiatives without the King?s acknowledgement. Henry intervened decisively at times to redirect events at his pleasure. Wolsey has to look like he was implementing the King?s policies even if he was pursuing his own ideas. Henry played a more significant role in the formation and conduct of Wolsey?s foreign policy than has traditionally been suggested. It was argued that the aim was perused in order to preserve some influence for England in foreign affairs, by ensuring that no one attained such dominance that he could arrange matters without taking into account the interests of other states, such as England. The claim was that Wolsey followed this policy by threatening to give his support to whichever side seemed likely to be worsted by the other. It was maintained that this policy was generally successful in ensuring that England?s international status remained high. This is the orthodox interpretation, where the main idea is that Wolsey wanted to maintain the balance of power. ...read more.

This placed Charles in an overwhelmingly dominant position and Henry VIII was not slow to seek advantage of the situation. He realised that here was a rare opportunity to fulfil his intermittently held dream of securing the French crown for himself; Francis was prepared to launch fresh attacks on Charles within a year of his release. Henry had hopes of launching an attack on France while she was leaderless, but he was forced to abandon these when he was unable to raise the necessary finance. It shows that Wolsey was less enthusiastic about this, as shown by the lack of determination in making success of the ?Amicable Grant? which was supposed to fund for this. However Wolsey was certainly not diligent in encouraging the formation of an anti-imperial alliance (the League of Cognac) in northern Italy in 1526, with which France could associate in her efforts to reserve the verdict of Pavia. A further aim of Henry?s was to achieve everlasting honour and glory. He wanted to be remembered throughout the ages and to have a huge reputation in Europe and be among the great superpowers in Europe. He achieved historical remembrance quite easily from the many famous acts he passed; however he did bathe in a huge amount of glory and honour when the field of cloth of gold was held. ...read more.

However it failed because Mary and Charles did not have children. But, in 1514 Louis XII of France became a widower. Wolsey seized the opportunity to propose a Valois-Tudor alliance to be sealed by the offer in marriage of Mary, sister of Henry VII. With Henry?s willing consent, the marriage went ahead and the ensuring treaty gave Henry an annuity of 100,000 crowns and confirmed English possession of Tournai. The success of the negotiations had enabled Wolsey to cement his place as the King?s chief diplomat. Scarisbrick?s interpretation has not been replaced by an alternative straightforward explanation. This is because it has become more and more apparent that no coherent pattern ever existed in Wolsey?s approach to diplomacy. It is now widely accepted that there was no single guiding principle that directed his actions throughout his 15 years in power. At differing times he was motivated by selfish considerations, especially a desire to obtain more extensive or longer-lasting delegated powers from the Pope. The need to satisfy the expectations of Henry VIII to further what he considered to be national or papal interests and by an altruistic inclination to benefit mankind by creating an era of peace. It is impossible to detect if many or all of these motives were behind each decision he made. There is not enough evidence to judge the importance of these motives. So in conclusion, Wolsey?s foreign policy to a great extent, satisfied Henry?s ambitions because Wolsey did exactly what Henry wanted; even though he thought about himself a lot. ...read more.