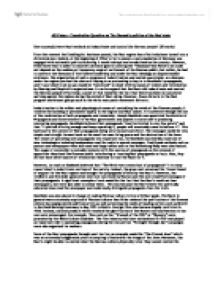 How successful were n**i methods to indoctrinate and control the German people?

AS History - Examination Question on The Domestic policies of the n**i state How successful were n**i methods to indoctrinate and control the German people? (30 marks) From the moment the Enabling Act has been passed, the n**i regime has effectively been turned into a dictatorial one. Indeed, at the beginning of Hitler's rise to power a vast population of Germany was engaged with nationalist politics believing it would reshape and revolutionarise the country. However, Hitler knew that in order to reach his ultimate goal in creating the "Thousand Year Reich"; he could not depend on the sudden yet temporary surge of excitement of the German public; but rather, he had to convince the Germans of the Fuehrer leadership and make the n**i ideology an unquestionable existence. The organisation of such a program of indoctrination and control was simple: as a German under the regime you had the choice of buying in or pretending to buy in to Goebbels's propaganda, and if you failed to do so you would be "convinced" or dealt with by means of violent and intimidation by Goering and Heydrich's organisations. It can be argued that the Nazis did indoctrinate and control the German people effectively; a proof of that would be the fact that there has been no successful uprising against the regime during the period of n**i ruling. ...read more.

During the 1920s, Weimar culture did flourish and many of the population enjoyed such a feature of democracy which severely lacked in the n**i regime. In order for Hitler to create a "Thousand Year Reich", the youth needed to be educated to the spirit of National Socialism. The youth would be the future one day and the n**i's understood that; they stated that "whoever has the youth has the future". This showed that Hitler understood the importance of manipulating education in indoctrinating the youth from the beginning as well as equipping them for the future. Boys were trained to be soldiers whilst girls would be trained to be housewives; this was achieved through compulsory state run organisations organised by Baldur bon Schirach. Education was also brought under state control: the NSLB was set up for teachers and 97% of them joined. All Jewish or politically suspicious teachers were dismissed. The school curriculum was also revised and Sports, History, Biology and German Studies were made priority. Religious Studies was dropped from the curriculum. History was promoted so the students could learn about the bitter past and how the Jewish liberal politicians "stabbed them in the back" whilst biology would teach racial superiority using science to "prove" that German were the "master race". Policy towards the young weren't however as successful as n**i propaganda lead us to believe. ...read more.

However, as the war progressed the exposure of the weakness of the organisation was clearly present with events challenging the Gestapo such as the July b**b plot in 1945. Indeed, the initial years of the regime did receive the support a vast population across the German society; propaganda itself was enough to mobilise and even control the masts. However, as the years went on supplemented by the continuously lack of democracy, the people of Germany began to be disengaged with the dictatorial government. More importantly, they were no longer interested or convinced by the layers and layers of propaganda paint masking the very truth and core ideologies of the n**i Party. This was the point when Hitler's attempt to indoctrinate the German through the means of propaganda, censorship and education has failed. The SS and the Gestapo's importance grew and the increasing use of militancy was ironically a testimony of failure for the Weimar government to control the emotions and thoughts of the German people. The n**i's methods of physiological indoctrinated has been deemed ineffective. However, the tactics of penetrating fear using institutions such as the SS and Gestapo throughout the German society was a success. This means of physical control was effective in the sense that Germans, even though reluctantly, would follow the rules in this dictatorial regime. By all means this gave Hitler the power to control Germany; however what he severely lacked was the authority and respect to govern. ...read more.