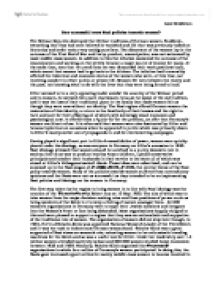 How successful were n**i policies towards women?

Lizzi Middleton How successful were n**i policies towards women? The Weimar Republic destroyed the lifetime traditions of German women. Suddenly, everything that they had once believed in vanished and life that was previously based on hierarchy and order took a very ambiguous form. The discontent of the women lay in the outcome of the First World War and its by-product, emancipation, was not welcomed by most middle class women. In addition to this the inflation worsened the outcome of the emancipation and working on the streets became a major source of income for many. At the same time, men that returned from the war demanded their work positions back, which meant that women had to go back to the kitchen. The inflation had irreversibly affected the historical and economic status of the women who were, at this time, not receiving comfort in either public or private life. Women felt torn between the reality and the past, not knowing what to do with the lives that they were being forced to lead. Hitler seemed to be a very appealing leader amidst the anarchy of the Weimar period and to women, he seemed even more charismatic because he spoke of the old tradition, and it was the loss of their traditional place in the family that made women felt as though they were now without an identity. ...read more.

The birth rate remained fairly constant throughout the 1930s although it did increase between 1933 and 1934 at the end of the depression. It could be seen that this was a positive response to n**i policy but is more likely that it was due to the return to full employment and the end of the depression that had seen such a low moral throughout Germany. n**i propaganda seems to have had some effect on women but not as much as the leaders had hoped for and this could well be because propaganda stressed that it was a woman's responsibility to bear children not for personal reasons but out of her duty to the state, which could have put many women off the idea. The number of marriages increased as well but this too is more likely to have been a sign of the end of the depression as people were beginning to be able to afford to indulge in such events again, rather than because of the introduction of n**i marriage loans. Leading up to and during the second world war, the quest for a larger population of genetically pure Germans led to a further encouragement or procreation, but this time procreation outside of marriage, in Hitler's Lebensborn programme. ...read more.

n**i ideology did succeed in mobilising the allegiance of women which is what they intended to achieve with the creation of the Woman's Front. Many of the other policies that Hitler implemented on his appointment as Chancellor in 1933, however, were not as successful as he would have hoped them to be and the small successes that there were represented not so much a social revolution as an attempt to return to their traditional values. The direct impact of n**i polices was limited; earlier marriages and a rising birth rate were related more to increasing prosperity not to social policy and with the achievement of nearly full employment in 1936, women were required to return from the workplace - a complete contradiction to the initial n**i policy. Hitler wanted to create more Aryan children, but his implementation of eugenics policies reduced the population potential. He wanted to create the 'perfect family' but the introduction of SS 'brothels' made family relationships difficult and more and more men were divorcing their wives. There were mixed reactions from women regarding Hitler's policies, they voted Hitler into power because he offered them a return to the traditional values that they felt they were being denied of and, to a certain extent he did give to these women what he had promised but, although filling a lot of theirs, did not succeed to fulfil his own desires. ...read more.