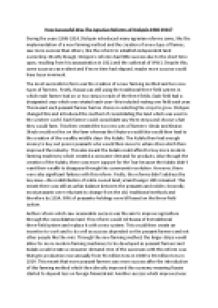 ﻿How Successful Was The Agrarian Reforms of Stolypin 1906-1914? During the years 1906-1914, Stolypin introduced many agrarian reforms some, like the implementation of a new farming method and the creation of a new type of farmer, saw more success than others, like the reform to establish independent land ownership. Mostly though, Stolypin?s reforms had little success due to the short time span, resulting from his assassination in 1911 and the outbreak of WW1. Despite this, some success was evident and if more time had elapsed, maybe more success would have been imminent. The most successful reform was the creation of a new farming method and two new types of farmers. Firstly, Russia was still using the traditional three-field system in which each farmer had on or two strips in each of the three fields. Each field had a designated crop which was rotated each year- this included resting one field each year. This meant each peasant farmer had no choice in selecting the crops to grow. Stolypin changed this and introduced the method of consolidating the land which was used in the western world. ...read more.

Anther reform which saw reasonable success was the aim to improve agriculture through the consolidation land. This reform would rid Russia of its traditional three-field system and replace it with a new system. This would then create an incentive to work and to do well as success depended on the peasant farmers and not other people like the mirs. Through the new farming method, the larger strips would allow for more modern farming machinery to be developed as peasant farmers and Kulaks would create a consumer demand. One of the successes with this reform was that grin production rose annually from 56 million tons in 1900 to 90 million tons in 1914. This meant that more peasant farmers saw more success after the introduction of this farming method which then directly improved the economy meaning Russia started to depend less on foreign financial aid. Another success which improved was due to the expansions within Siberia which led Russia to becoming the world?s leading cereal exporter. This was not possible before Stolypin?s reforms and therefore, it is obvious that Stolypin?s reforms had a positive effect on Russia. ...read more.

Another success of this reform was a direct effect of the other reforms as kulaks bought out poorer peasants who then moved to urban cities looking for work. This improved the industry as Russia financially able to support itself with enough food for every Russian without everyone being a farmer. However, as a result of the Kulaks ?buying out? poorer peasants, many peasants could afford to move to urban cities and often fell into deeper hardship. Within this group, there were also those who were too old or to rooted to seek alternative work which meant the toll rose, along with unemployment rates. Overall, Stolypin?s reforms aw mixed success due to Stolypins assassination and the outbreak of WW1 as Stolypin himself stated that the reforms would need at least 20 years in order for success to be evident. This meant the focus from improving and modernising Russia moved towards the victory with the war. Despite the short time span, there were small improvements within Russia which were a direct result of Stolypin?s reforms. This also meant that if Stolypins time allocation had taken place then much larger improvements would probably have been made. ...read more.