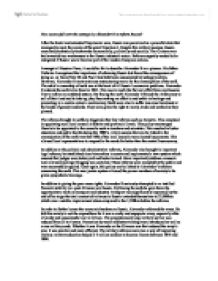 How successful were the attempts by Alexander II to reform Russia?

How successful were the attempts by Alexander II to reform Russia? After the brutal and extended Napoleonic wars, Russia was perceived as a powerful state that managed to repel the armies of the great Napoleon I. Despite this military success, Russia remained domestically backwards economically, politically and socially. The Crimean war had revealed true weaknesses in the Russia industrial sector. Reforms urgently needed to be instigated if Russia was to become part of the modern European nations. Amongst all Russian Tsars, it would be fair to describe Alexander II as a pioneer. His father Nicholas I recognised the importance of reforming Russia but feared the consequences of doing so, as Tsars Peter III and Paul I had both been assassinated by unhappy nobles. However, Alexander II most notorious restructuring was to be the emancipation of the serfs. The noble's ownership of serfs was at the heart of all Russia's economic problems. Alexander II ordered the serfs to be freed in 1861. This was to mark the fist real effort from any Russian Tsar to reform an outdated system. ...read more.

In order to further loosen the economic burdens on Russia, Alexander reformed the army. He did this mainly to cut the expenditure for it was a costly and unpopular army, especially after a b****y and unsuccessful war in Crimea. The preposterously long military service was reduced from 25 to 6 years. Promotion by merit and better training were introduced as well as a new military code. Whether it was Alexander or the Crimean war that reduced the army's size, it was smaller and more efficient. The military reforms were also a way of improving literacy, military education helped 2-3 million soldiers to become literate between 1870 and 1890. Alexander's liberalisation of the army was followed by new policies on national minorities that were previously heavily persecuted. The Finnish language was encouraged and their was even a slight move towards toleration of Jews. By liberating the serfs Alexander made an impressive move (for the times) towards some sort of liberalism. This led to the birth of Russian political journalism which also encouraged fair trials as it would criticize the justice system. ...read more.

Maybe the serfs had a say in their legal affairs, but the state often meddled with justice as government officials could only be tried under special conditions. The major expectations in education were never fulfilled. The government increased its control over schools and students suffered a period of prosecution during 1861. The economy still suffered from the poor education system and their was a lack of entrepreneurial spirit. Despite all the shortcomings in his reforms and his personality, Alexander II founded the beginnings of industrial transformation that speeded up in the 1890's as well as being responsible for planting the seeds to liberalism in Russia. Even though the emancipation of the serfs was nothing more than a symbol, it promoted liberalism and was an attempt to give equal opportunities to all. Even if he was unsuccessful in reforming the economy, few leaders in Russia have been, difficult environmental conditions and un-commercial peasants were at the heart of Russia economic failures. One is forced to draw the conclusion that despite several failures Alexander II was making progress and attempted to steer Russia in the right direction, his reforms may not have functioned, but his ideology was the correct one. ...read more.