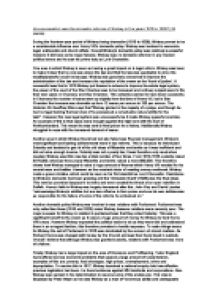 ﻿How successful were the domestic reforms of Wolsey in the years 1515 to 1529? (24 marks) During the fourteen-year period of Wolsey being chancellor (1515 to 1529), Wolsey proved to be a considerable influence over Henry VIII's domestic policy. Wolsey was involved in economic, legal, aristocratic and church affairs. Overall Wolsey's domestic policy was relatively successful however it did have some major failures. Wolsey was no domestic reformer in any modern political sense and he saw his prime duty as Lord Chancellor. One area in which Wolsey is seen as having a great impact on is legal reform. Wolsey was keen to make it clear that no one was above the law and that the law was applicable to all so the wealthy/powerful could not escape. Wolsey was genuinely concerned to improve the administration of the law and increase the reputation of the crown as the ?fount of justice?. A successful was that in 1516 Wolsey put forward a scheme to improve the whole legal system, the power of the court of the Star Chamber was to be increased and ordinary subject were to file their own cases in Chancery and Star Chamber. ...read more.

Subsidy was not a yearly tax; it was therefore only used when needed. Wolsey used this new tax a total number of four times. From 1513-1516, subsidy raised £170,000, whereas three yearly fifteenths and tenths raised a mere £90,000. This therefore shows how Wolsey managed to raise a huge amount of finance which Henry VIII needed for his consist wars and battles. However as the constant strain of needing money continued, Wolsey made a grave mistake, which could be seen as his first downfall as Lord Chancellor. Resistance to Wolsey’s demands had been growing and the “Amicable Grant” (1525) was the final straw. This new tax provoked taxpayer’s to strike and even created the threat of an open rebellion in Suffolk. Henry’s faith in Wolsey was hugely decreased after this. John Guy and David Loades “acknowledge Wolsey's abilities but are less effusive in their praise and see his own deficiencies as responsible for the failure of some of the reforms he embarked on.” Another domestic policy Wolsey was involved in was relations with Parliament. ...read more.

To resolve this in 1517, Wolsey launched a national enquiry into how effective previous legislation had been. He found evidence against 264 landlords and corporations. Also Wolsey was earnest in his determination to reserve some of the enclosures. This view is displayed by Peter Gwyn as he sees Wolsey as a man of "enormous ability and unstoppable determination" with a huge capacity for hard work and whose reforms were limited because of the ambitions of Henry in Europe. Wolsey failed in enclosure and profiteering however as he was often too busy to deal with some cases and no long term improvements in prices were made. Additionally he raised suspicions that he campaigned against enclosure only to provoke and weaken his wealthy opponents who were profiting from enclosure. In conclusion Wolsey was hugely successful in Domestic reforms as he excellent control over financial management and managed to supply Henry VIII with enough money for his involvement in wars. However overall Wolsey failed in domestic reforms as his introduction of the Amicable Grant undid all of his successes in Henry?s eyes. Which therefore lead to Henry losing trust in Wolsey. ...read more.