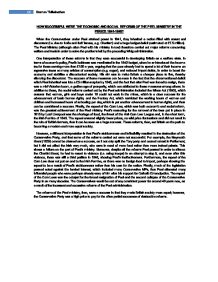 How successful were the economic and social reforms of the Peel ministry in the period 1841-1846?

HOW SUCCESSFUL WERE THE ECONOMIC AND SOCIAL REFORMS OF THE PEEL MINISTRY IN THE PERIOD 1841-1846? When the Conservatives under Peel attained power in 1841, they inherited a nation filled with unrest and discontent (i.e. due to 'knife and fork' issues, e.g. Chartism) and a huge budget deficit (estimated at �7.5 million). The Peel Ministry (although often Peel with his ministry in tow) therefore carried out major reforms concerning welfare and trade in order to solve the problems left by the preceding Whig administration. One interpretation of these reforms is that they were successful in developing Britain as a welfare state. In terms of economic policy, Peel's boldness was manifested in the 1842 budget, when he re-introduced the income tax for those earning more than �150 a year, arguing that the poor already had to spend a lot of their income on regressive taxes on many articles of consumption (e.g. ...read more.

hours of women and children and increased hours of schooling per day, which is yet another advancement in human rights, and thus can be considered a success. Finally, the repeal of the Corn Law, which was both economic and social reform, was the greatest achievement of the Peel ministry: Peel's reasoning for the removal of the laws put in place in 1815 by Lord Liverpool was the shortage of food, the threat of the Anti-Corn Law League and, in the short term, the Irish Famine of 1845. The repeal ensured slightly lower prices, no wild price fluctuations and did not result in the ruin of British farmers, thus it can be seen as a huge success. These reforms, then, set Britain on the path to becoming a modern and more equal society. ...read more.

Finally, much of the legislation passed acted against the landed interest, which included many Conservative MPs, thus Peel alienated many influential people who were perhaps already wary of him after his support for Catholic Emancipation. The repeal of the Corn Laws was the catalyst for the forced resignation of Peel and the second collapse of the Conservative Party in as many decades. The Conservatives would be out of any consistent power for around 40 years now, as a result of the incessant and excessive reforms of the Peel administration. The reforms of the Peel ministry, then, were a success in that they made British society more equal; however, the Conservative Party was a high price to pay for the often partial successes of destructive reforms. ?? ?? ?? ?? ...read more.

The student answers the question very well because they address both interpretations of Peel's ministry, which shows they are thinking widely enough to understand that historians have more than one opinion on the same event. The introduction shows a good ...

The student answers the question very well because they address both interpretations of Peel's ministry, which shows they are thinking widely enough to understand that historians have more than one opinion on the same event. The introduction shows a good knowledge of what came before Peel's ministry, and this is good because it immediately tells the examiner that the student understands the causes of Peel's actions. It could be improved even further by having a short sentence on the end summarising the argument the student is about to make, as this would show the examiner right away that they capable of organising information. It's always good to demonstrate in the introduction that you can talk about the two sides of the story, in case you mess up the structure later. It's good how the student devotes one half of the essay to the argument for, and the other half to the argument against, because this shows that they have a crystal clear understanding of the fact that there are two interpretations. If they jumped between one interpretation and another, the essay might look confused and lack a clear line of argument.

The evidence used in this essay is excellent. For example, the student uses precise statistics at some points - "Ã‚Â£5 million surplus by 1845" is good because it shows that the student understands that Ã‚Â£5m is a lot of money for a surplus. Simply saying "He made a surplus by 1845" wouldn't have been as good because it could have been a very small and insignificant surplus. The conclusion lets the essay down slightly because it is so short: because the point of the conclusion is to prove you can say why you think one side of the argument is correct, it's worth devoting at least a full sentence to each in order to get in as much summarised evidence as possible. It is the conclusion that takes the essay down from 5/5 to 4/5: because it isn't detailed enough and was probably rushed, the lack of analysis drags the essay down. This essay also gets a good balance between providing evidence and explaining why that evidence is there. It is important not to simply tell a story, because anyone can learn details of facts: saying why something happened shows that you have thought about it enough to understand the causes. For example, in the second paragraph the student writes "he re-introduced the income tax for those earning more than Ã‚Â£150 a year...in order to boost the economy and stabilise a discontented society. His aim was to make Britain a cheaper place to live, thereby silencing the discontent. The success of these measures can be seen...". They have described the tax, and then gone on to explain why the tax was introduced, the effect of it ("silencing the discontent"), and then explained why it was a success.

The essay benefits from the use of several technical terms, such as "caused" in "[the Maynooth Grant] not only split the Tory party and caused unrest in Parliament". Using words like "cause" show that you have an excellent understanding of how one event (the Maynooth Grant) had a direct effect on another (unrest in Parliament). The student has obviously proof-read as the spelling, punctuation, and grammar are generally excellent with only minimal mistakes. This is good as the examiner won't struggle to understand what the student means and can spend more time focusing on the argument they have created. Saying things like "However, a different interpretation..." in the middle of the essay is excellent because it reminds the examiner that the student is always thinking about how history can be interpreted in different ways.