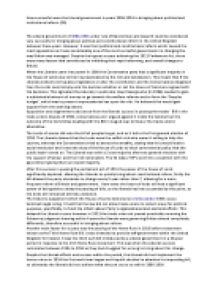 ﻿How successful were the Liberal government in years 1906-1914 in bringing about political and institutional reform (24) The Liberal government of 1906-1914 under rule of Bannerman and Asquith could be considered very successful in bringing about political and constitutional reform in the United Kingdom between these years. However, it was their political and constitutional reform which caused the most opposotion as it was considerably one of the most succesful governments in changing the way Britain was managed. Despite their great success achieving the 1911 Parliament Act, there were many factors that contributed to inhibiting their rapid reforming, and overall changes to Britain[a]. When the Liberals came into power in 1906 the Conservative party had a significant majority in the House of Lords due to their representation by the rich and landowners. This meant that if the Liberals wished to bring about legislation or alter the constitution and the Conservatives disagreed then the Lords could simply veto the decision whether or not the House of Commons agreed with the decisions. ...read more.

The 42 labour MPs went into a coalition with the government giving them an overall majority[d]. After this success in passing the parliament act of 1911 the power of the House of Lords significantly depleted, allowing the Liberals to quickly bring about constitutional reform, firstly the bill allowed the party electorate to change every 5 year rather than 7, allowing for a more frequent reform of Britain and government. How every the house of lords still had a significant power of being able to delay the passing of bills, so the liberals had not succeeded by this point, as the lords still remained entirely unelected[e]. The[f] Osborne Judgement which the House of Lords delivered on 21 December 1909, was a landmark legal ruling. It held that the law did not allow trade unions to collect a levy for political purposes, specifically, to fund the infant Labour Party's organisational and electoral efforts. This delayed the Liberal success however in 1913 the trade union act passed practically reversing the Osbourne judgment showing within 4 years the liberals were governing Britian almost completely differently, therefore successful in bringing about reform. ...read more.

Make sure you always link your point back to the question at the end of each paragraph [e]Balanced assessment- did it make the UK more democratic? [f]Make sure you always start a paragraph with a point- try and link to previous points for example Constitutional reform also took the shape of laws that helped the working class gain access to politics- such as the 1913 Trade Unions Act, which secured funding for the Labour party from the Trade Unions movement, and the Payment of MPs act which allowed ordinary working men to take up the position of MP [g]Hmm- it was never actually implemented, almost caused a civil war only stopped by the outbreak of WW1 and then ultimately led to the breakup of the UK, the Anglo Irish War and the Irish Civil war- not that successful really! [h]A Good Effort +You make detailed points with plenty of supporting evidence +You make the central argument that the Parliament Bill helped to successfully democratise British politics T Go back to basics with your paragraph structure- Point Evidence Explain- always link points to the question and don?t just include detail for details sake Q What about women?! High L3 16 ...read more.