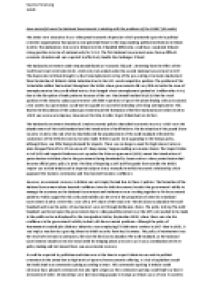 How successful were the National Governments in dealing with the problems of the 1930s?

﻿Sophie Vineberg U6SD How successful were the National Governments in dealing with the problems of the 1930s? (45 marks) The 1930s were unusual as it saw widespread economic depression which promoted a growth in political extremist organisations that posed a real potential threat to the long-standing political institutions in Britain in 1934. The abdication crisis seen in Britain in 1936, if handled differently, could have weakened Britain?s strong position in terms of national unity for WW2. The first National Government arose from a difficult economic situation and was expected to effectively handle the challenges it faced. The National Government under MacDonald faced an ?economic blizzard?, stemming from the effect of the Wall Street Crash in October 1929, which only truly ended under the second National Government in 1937. The depression in Britain brought cyclical l unemployment on top of the pre-existing structural employment from the decline of Britain?s stable industries due to the UK?s weak competitive position. The problem of the ?intractable million? had existed throughout the 1920s where governments did very little to tackle the issue of unemployment as they could afford not to, this changed when unemployment peaked at 3 million after WW1 due to the disruption of trade patterns because of the war. MacDonald realised in 1931 that the weak position of the minority Labour government with little experience of power let alone dealing with an economic crisis unseen by a generation would not be capable or successful in dealing with rising unemployment. ...read more.

NUWM was set up in 1921 but only really took off in the 1930s where unemployment was higher than in the 1920s so organised more mass protests ? ?Hunger Marches? occurred in 1929, 1930, 1932, 1934 and 1936 as the organisation seized the opportunity to harness bitterness as a means of the government changing their policies. This quasi democratically lead organisation was headed by Communist Wal Hannington who organised the largest march in 1932 where 3000 marchers from depressed areas descended on Hyde park where they were met by a further 1000 supporters to present a petition to government signed by 1 million people. The National Government were aware of the NUWM?s actions and so deployed 70 000 policemen for the 4000 protesters to send out a strong signal on the government?s stance on extremist organisations as this was the biggest deployment of police since 1884. After the humiliation at Hyde Park in 1932, the NUWM were never able to muster the same support again, aided by the drop in unemployment due to the growth of new industries. The NUWM was not supported by Labour or the TUC as it was simply seen as too extreme, highlighting the government?s, but more importantly, the opposition?s desire to maintain stability during turbulent times. The Public Order Act 1934 banned paramilitaries banned the wearing of military uniforms in public places which helped put an end to the BUF?s activities as this would have attracted many members as a large majority were ex-soldiers from WW1 which contributed to the drop in support form 50 000 members in 1934 to little over 5000 in 1936. ...read more.

Other political groups such as Labour and the Liberals were asked along with other PMs of British dominions if a morganatic marriage between Edward and Simpson would be acceptable. Baldwin returned to the king with the results which was that the proposed morganatic marriage would not be accepted nor recognised by opposition the National Government or by PMs throughout the Empire. This final straw lead to the abdication of Edward VIII on the 7th December 1936. The National Government?s approaches to deal with all economic, political and constitutional problems in the 1930s can be commended and considered successful to an extent. The National Government played its role to not exacerbate problems outside their control by introducing policies such as the Special Areas Act 1934. Although it could be said that the government did very little in the 1930s with a more Laissez Faire approach to the problems in the economy and relied heavily on British morality and belief in democracy in terms of political and constitutional problems. However, this ?hands off? approach proved to be successful as the British economy had recovered by the end of the 1930s, Britain did not succumb to political extremism and the issue regarding the Abdication crisis was swiftly solved by Baldwin and his government. Although other factors came into play in many of these problems, the confidence and stability that was brought about by the introduction of the National Governments meant that it was harder for problems that occurred in the 1930s to ever manifest into much larger issues. ...read more.