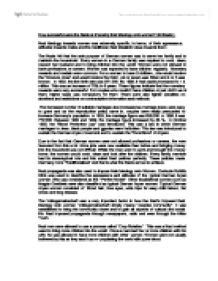 How successful were the Nazis at imposing their ideology onto women?

How successful were the Nazis at imposing their ideology onto women? (40 Marks) n**i ideology towards women was extremely specific, in terms, of their appearance, attitudes towards males and the traditional, n**i idealistic views towards them. The Nazis felt that the sole purpose of German women was to serve her family and to maintain the household. Every women in a German family was required to cook, clean, respect her husband and to bring children into the world. Women were not allowed to have professions or careers .Women was expected to have children regularly. Monetary rewards and medals were common. For a women to have 8 children , she would receive the "Honours cross" and would receive the Gold , six or seven was Silver and 4 or 5 was bronze . ...read more.

In October 1935, the "Blood Protection Law" was introduced. This was a law in which German marriages to Jews, black people and gypsies were forbidden. This law was introduced to sustain the German Aryan movement and to sustain the "Pure Blood" of Aryans. Due to the fact that German women were not allowed professions or careers, the men favoured from this a lot. More jobs were now available than before and bringing money into the household was not difficult. Whilst the men went to work and brought the money home, the women would cook, clean and look after the children. Every family member had its stereotypical role and this suited n**i policies perfectly. These policies made Germany more "Traditionalised" and that is what the Nazis set out to achieve. ...read more.

Once a man had four or more children with his wife, he was allowed to have more children with other women. Women were not usually bothered by this as they saw it as re- populating the world with purer blood. Overall, I think that the Nazis imposed their ideology onto women very successfully. Well established groups such as the NSF and DFW were created in which women joined. The use of propaganda and role models such as Gertrude Sch�ltz Klink and Magda Goebbels influenced women into doing what the n**i policies wanted them to do and finally the Monetary rewards and " Medals of Honour " for childbirth . All of these factors influenced women and rewards, loans and benefits were handed out if these policies and aims were reached. An awful lot of peer pressure was also involved in imposing n**i ideology onto women! ...read more.