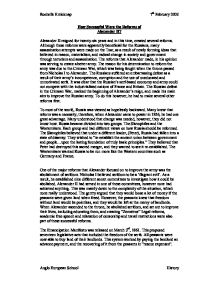 How Successful Were the Reforms of Alexander II?

How Successful Were the Reforms of Alexander II? Alexander II reigned for twenty-six years and in this time, created several reforms. Although these reforms were apparently beneficial for the Russians, many assassination attempts were made on the Tsar, as a result of newly forming ideas that believed in reason, materialism, and radical change in society and government through terrorism and assassination. The reforms that Alexander made, in his opinion was serving to create a better army. The reason for his determination to reform the army was due to the Crimean War, which was being fought when the throne passed from Nicholas I to Alexander. The Russians suffered an embarrassing defeat as a result of their army's incompetence, corruption and the use of uneducated and unmotivated serfs. It was clear that the Russian's serf-based economy and army could not compete with the industrialized nations of France and Britain. ...read more.

Nicholas I believed serfdom to be a 'flagrant evil'. As a result, he established nine different secret committees to investigate how it could be abolished. Alexander II had served in one of these committees, however none had achieved anything. This was mainly down to the complexity of the situation, which none really understood. The gentry argued that they would loose a lot of money if the peasants were given land when freed. However, the peasants knew that freedom without land would be pointless, and they would be left at the mercy of landlords. When Alexander ascended to the throne, he abolished serfdom, and set out to improve their lives, including educating them, and creating "Zemstvos" Legal reforms, academic free speech and relaxation of censorship and travel restrictions were also part of these successful reforms. The Emancipation Manifesto was released on March 3rd, 1861. This proposed seventeen legislative acts that included the freedom of the serfs. ...read more.

Many were forced to pay a lot more then the land was actually worth. By 1900, roughly 85% of the Russian people lived in the countryside and earned their living from agriculture. The nobility owned the best land, and the vast majority of peasants lived in poverty. As the country became more industrialized, the political system was placed under even more strain. The lower classes began to attempt to gain more freedom which helped spark off fears of a revolution, and the beliefs that society would needed to change, and this modification could be obtained through terrorism and assassination. As Russia became more modern, larger and far more complicated, the true worthlessness of Tsarist rule became more and more apparent. Liberals and radicals wanted a parliamentary democracy and the freedom of expression which most European states had were severely unhappy. In conclusion, Alexander's reforms were successful, as they did improve the army, but the different reactions from the parties led to severe rebellion and the eventual assassination of Alexander II in 1881. Rochelle Enticknap 7th February 2003 Anglo European School History ...read more.