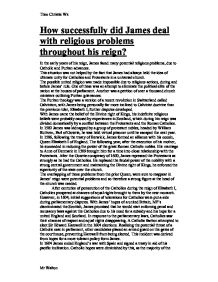 How successfully did James deal with religious problems throughout his reign?

How successfully did James deal with religious problems throughout his reign? In the early years of his reign, James faced many potential religious problems, due to Catholic and Puritan advances. This situation was not helped by the fact that James had always held the idea of ultimate unity for Catholics and Protestants in a universal church. The possible united religion was made impossible due to religious actions, during and before James' rule. One of these was an attempt to eliminate the political elite of the nation at the houses of parliament. Another was a petition of over a thousand church ministers outlining Puritan grievances. The Puritan theology was a version of a recent revolution in Switzerland called Calvinism, with James being personally far more inclined to Calvinist doctrine than the previous ruler, Elizabeth I, further disputes developed. With James came the belief of the Divine right of Kings, his indefinite religious beliefs were probably caused by experiences in Scotland, which during his reign was divided domestically by a conflict between the Protestants and the Roman Catholics. In 1582 James was kidnapped by a group of protestant nobles, headed by William Ruthven, Earl of Gowrie, he was held virtual prisoner until he escaped the next year. In 1586, following the treaty of Berwick, James formed an alliance with his cousin, Queen Elizabeth I of England. The following year, after the execution of his mother, he succeeded in reducing the power of the great Roman Catholic nobles. His marriage to Anne of Denmark in 1589 brought him for a time into close relationship with the Protestants. After the Gowrie conspiracy of 1600, James repressed the Protestants as strongly as he had the Catholics. ...read more.

Catholic anger built up towards the anti-Catholic policies eventually causing the Gunpowder plot. The Puritans thought that the Church of England had kept too many catholic practices. They wanted church government put into the hands of the people rather than a hierarchy of bishops and archbishops. Puritans were encouraged that James was Calvinist in theology; however, he did not share Calvin's views on church government. Returning home to London in 1604 James was met by a group of petitioners, called the millenary petition because it bore the signatures of over a thousand church ministers. They stressed Puritan grievances and wanted an improvement in clerical standards and changes in style or worship. Their main aim was to increase the amount of church sermons, improvements in clerical vestments and they made clear their dislike for the Catholics, as they saw it, the existence of 'popish opinion' within the church. James resolved this matter extremely efficiently and fairly. Seeing that they were not radicals but ministers of the gospel, he called a conference at Hampton Court to discuss their grievances, at which he would chair. In 1604 the Puritan leaders argued their grievances to James, who was prepared to listen to their case. James after hearing their side, remained unmoved, but some clerical standards were changed, such as ensuring a well-paid educated clergy and greater missionary activity in Ireland and Wales. The only improvement which met the demands of the Puritans was to produce a new translation of the Bible. When Dr John Reynolds of Corpus Christi College, Oxford proposed a new translation of the English Bible, he found James enthusiastic. The king detested the Geneva Bible, which was the most popular translation used in England. ...read more.

James convoked the Hampton Court Conference at which he authorized a new translation of the Bible called the King James Version. His undue severity toward Roman Catholics, however led to the abortive Gunpowder plot. James tried unsuccessfully to advance the cause of religious peace in Europe through marriage. His daughter married the elector of the Palatinate FrederikV, the leader of the German Protestants. He also sought to end the conflict by attempting to arrange a marriage between his son, Charles and the Infanta of Spain, then the principal Catholic power. James mistreated the Catholics by ignoring them and pressing laws and fines on them, hence the Gunpowder plot was conspired in retaliation to his anti-Catholic policy. With the Puritans he did listen to a certain degree, holding a conference for their grievances. With the help of Abbot the Puritans gained respect and equality. William Laud's contribution to drive the Puritans away was stopped by James, however under the ruling of Charles, Laud developed a further doctrine of Arminianism called Laudism. James treated the Arminians with most respect out of the three religions, publishing a book of theirs and controlling the use of predestination in sermons, which was repressed by the Arminians. His Respect towards them in comparison to Catholicism and Puritanism is down to his theological belief in Arminian doctrine to which he discovered throughout his reign. Overall James dealt effectively with religious problems during his reign, however favouring one resulted in anger for the other. His intolerance to listen to the Catholics was probably the only negative part about his reign in terms of religion, as it led to one of the biggest events in history, the gunpowder Plot of 1605. Theo Christie Wx Mr Walton ...read more.