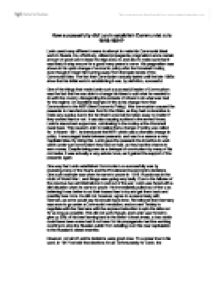 How successfully did Lenin establish Communist rule 1918-1924? Lenin used many different means to attempt to make his Communist ideal work in Russia. He, effectively, utilised propaganda, pragmatism and a certain amount of good luck to keep his reign secure, and also to make sure that it was likely to stay secure for a good many years to come. His pragmatism was shown in his quick change of economic policy after the Kronstadt mutiny, even though it meant him turning away from the basic tenets of the Communist idea. The fact that Communism actually lasted until the late 1980s show that his initial work in establishing it was, by definition, successful. One of the things that made Lenin such a successful leader of Communism was the fact that he was able to change his ideas to suit what he needed to do with the country, disregarding the protests of others to do what was best for the regime. An excellent example of this is his change from War Communism to the NEP (New Economic Policy). ...read more.

This did not work though, and Lenin was forced to give up 25% of his best farming land in the Brest-Litovsk treaty, a loss which could have been worse had it not been for his propaganda machine working overtime to stop the Russian public from rebelling over this near capitulation to the Russian's oldest enemies. However, not all of Lenin's decisions were good ones. To appear true to his word, in 1917 he held free elections for all. Unfortunately for Lenin, the Communists did not receive the majority of the vote, as he had feared would happen. The Social Revolutionaries ended up with the majority of the vote, with double the amount of seats in the Constituent Assembly than the Bolsheviks had. Lenin dealt with this problem in his typically direct style. He sent his Red Guards to close the Assembly soon after it had opened, and despite small protests, also crushed by the Guards, the Assembly was forgotten. This was a small blip in Lenin's judgement, which was, fortunately for him, easily solved and did not cause too much damage to his campaign. ...read more.

Some of the things that he did were to lessen the power of the church, which up until then had been a great force in the life of many of the peasants, and for the Bolsheviks to succeed they needed to have no opposition whatsoever. They also achieved this by banning the opposition political party and all non-Bolshevik newspapers. To appeal to the general worker and peasant, they also introduced a 48-hour week and insurance against injury or illness for them, something which no other previous government had done. This caused the general public to feel more inclined towards the new Government, and helped Lenin in his quest to establish Communism in Russia. In conclusion, I believe that Lenin was very successful in establishing Communist rule. Despite making some bad decisions, such as holding free elections and trying to stall in negotiations with the Germans, they were more than often solved to the advantage of Russia, and caused no lasting damage for Lenin's regime. Even if the idea was not Communist, it was always used to keep the Communist dream alive, and to secure its existence for the next 70 years. ...read more.