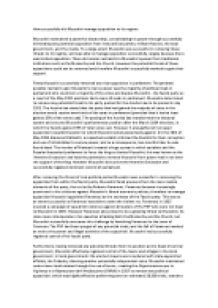 How successfully did Mussolini manage opposition to his regime

﻿How successfully did Mussolini manage opposition to his regime Mussolini maintained a powerful dictatorship, consolidating his power through successfully eliminating any potential opposition from rival political parties, militant fascists, the local government, and the media. To a large extent Mussolini was successful in removing these threats to his regime, and was able to manage opposition successfully, largely because there was limited opposition. There did remain restraints to Mussolini's power from traditional institutions such as the Monarchy and the Church. However the potential threat of these oppositions could not be removed and therefore Mussolini successfully worked to gain their support. Firstly Mussolini successfully removed any rival opposition in parliament. The greatest possible restraint upon Mussolini's rise to power was the majority of political rivals in parliament who could win a majority of the votes and depose Mussolini - the fascist party as a result of the May 1921 elections had a mere 35 seats in parliament. Mussolini determined to remove any potential threat to his party pushed for the Acerbo Law to be passed in July 1923. ...read more.

However Farannaci also proved to be a growing threat to Mussolini, he came more intemperate in his speeches attacking both the Monarchy and the Church, but Mussolini successfully overcame this challenge by banishing Farannaci to the town of Cremona. The PNF had been purged of any potential rivals, and the fall of Farannaci marked an end to the power and illegal activities of the sqaudrisiti. Mussolini had successfully regained control of his fascist party. Furthermore, having removed any potential threats from his position as the head of central government, Mussolini effectively regained control of the towns and villages in the local government. In local governments the elected mayors were replaced with state-appointed officials, the Podesta, silencing another potentially independent voice. Mussolini maintained control over local estates through the use of terror, creating the Organizzazione per la Vigilanza e la Repressione dell?Antifascismo (OVRA) in 1927 to remove any political opposition, which was highly effective performing over an estimated 20,000 visits, searches and arrests a week. Mussolini further limited the spread of rival political ideas through controlling the media, the most prominent attack, was in April 1919 when the fascists attacked the headquarters of the Avanti! ...read more.

The Aventine Secession and the Kings support of Mussolini further demonstrated that the king was not a threat to Mussolini. Furthermore Mussolini did successfully manage to limit the Kings powers. In 1928 Mussolini passed a decree which forced the King to select deputies from a list created by the Fascist Grand Council, and reformed Italy's constitution to a diarchy system in which the prime minister and the King were two equal head of states. Mussolini had not eliminated this threat to his regime but for the majority of his time in power he had effectively managed this opposition, and was in that respect successful. In conclusion Mussolini to a large extent was successful in managing the limited opposition he faced from the parliament and within the fascist party. Despite this Mussolini did not not achieve full dictatorial powers, the kings authority presided over him and it was because of the King that Mussolini was stripped of power on the 25th of July 1943. However Mussolini had secured his hold on power from 1922 to 1943, for these years there was no credible threat to Mussolini's regime demonstrating that to a large extent Mussolini had been successful in removing opposition. https://pastpapers.papacambridge.com/view.php?id=Cambridge%20International%20Examinations%20(CIE)/AS%20and%20A%20Level/History%20(9389/2019-May-June/9389_s19_ms_42.pdf ...read more.