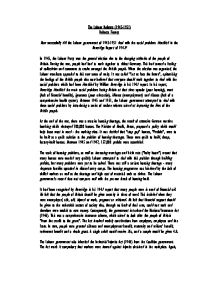 How successfully did the Labour government of 1945-1951 deal with the social problems identified in the Beveridge Report of 1942?

The Labour Reforms (1945-1951) Rebecca Feeney How successfully did the Labour government of 1945-1951 deal with the social problems identified in the Beveridge Report of 1942? In 1945, the Labour Party won the general election due to the changing attitudes of the people of Britain. During the war, people had had to work together to defeat Germany. This had caused a feeling of collectivism and consensus to evolve amongst the British people. When the election was organised, the Labour manifesto appealed to this new sense of unity. It was called "Let us face the future", epitomising the feelings of the British people who now believed that everyone should work together to deal with the social problems which had been identified by William Beveridge in his 1942 report. In his report, Beveridge identified the main social problems facing Britain at that time: squalor (poor housing), want (lack of financial benefits), ignorance (poor education), idleness (unemployment) and disease (lack of a comprehensive health system). Between 1945 and 1951, the Labour government attempted to deal with these social problems by introducing a series of welfare reforms aimed at improving the lives of the British people. At the end of the war, there was a massive housing shortage, the result of extensive German wartime bombing which destroyed 700,000 houses. The Minister of Health, Bevan, proposed a policy which would help those most in need - the working class. ...read more.

By 1947, the Education Act of 1944 was in operation. Labour had inherited this Act from the coalition government. This Act made secondary education compulsory until the age of 15 and also provided meals, milk and medical services at school. Secondary education differed in Scotland and England. At the age of 11, children sat an intelligence test (known as the "Quallie"), which determined the type of secondary school they would attend. In England, a tripartite structure was used. The top-scoring 20% of children would attend Grammar School. 75% of children attended a Secondary Modern, which provided a less "academic" education than that offered by Grammar Schools. Those who scored least in the intelligence test would attend Technical School, where they were taught practical skills. In Scotland there were only two types of secondary schools - Senior Secondary and Junior Secondary. Senior Secondary was academic, whereas Junior Secondary was more vocational. In Higher Education, also, universities and colleges were to expand the number of places available, and state grants were made available for those students who were able to win higher education places. With regards to education, the Labour government cannot be said to have made a vast improvement to the social problems identified in the Beveridge Report. Little was done to create more equal opportunities for working class children, and the equality of provision in different parts of the country was not greatly reduced. ...read more.

Inevitably, high costs were incurred due to people taking advantage of the scheme. Contrary to what they had expected, the scheme had to be financed out of general taxation, and charges had to be introduced for dental treatment and spectacles. Due to lack of finance, plans for new hospitals and health services had to be postponed. Nonetheless, the NHS was still seen as the essential core of the welfare state, and was highly effective in dealing with the health problems facing Britain at this time. Ultimately, between 1945 and 1951, the Labour government dealt with many of he social problems that had been identified in the Beveridge Report of 1942. Many houses were built in an attempt to eradicate the housing problems facing Britain following the War. Financial benefits were granted to the vulnerable sectors of society, such as the old and the unemployed, improving their lives to a certain extent. Primary education was prioritised, and working class citizens were given more education opportunities. The level of employment was greatly improved, and the NHS made health care accessible to everyone, regardless of income. However, the social problems highlighted by Beveridge were not completely eradicated. Many families remained homeless, and secondary education had not yet undergone substantial changes. Furthermore, the National Assistance Act meant that many people were still living below the poverty line. Undoubtedly, the Labour government 1945-1951 dealt with many of the problems facing Britain during this period, but there was still much to be done to drastically improve the lives of the British people. ...read more.