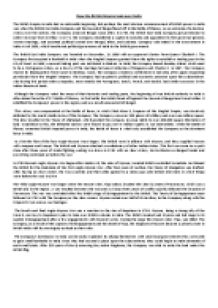 How the British Empire took over India

﻿How the British Empire took over India The British Empire in India had no noticeable beginning. But perhaps the most obvious commencement of British power in India was when the British East India Company and the Nawab of Bengal faced off in the Battle of Plassey. As an outcome of a decisive victory over the natives, the Company annexed Bengal. Soon after, in 1765, the British East India Company got permission to collect revenue from in Bihar. In 1772, the Company established a capitol in Calcutta and appointed its first governor-general, Warren Hastings, and assumed political control over Bengal, Bihar, and Calcutta. Company rule ended in the Government in India Act of 1858, which transferred political governance of India to the British government. The British East India Company was founded on December, 31 1600 with an approved charter from Queen Elizabeth I. The Company first acquired a foothold in India when the Mughal Emperor granted them the rights to establish a trading post in the city of Surat. ...read more.

This victory was compounded at the Battle of Buxar, in which Shah Alam II, Emperor of the Mughal Empire, was decisively defeated by the much smaller army of the Company. The Company won over 100 pieces of artillery and over one million rupees. This later resulted in the Treaty of Allahabad, which granted the company revenue rights to over 400,000 square kilometers of land. In addition to this, the defeated natives were forced to pay over 5 million rupees in war indemnities. While the Battle of Plessey cemented British imperial power in India, the Battle of Buxar is what truly established the Company as the dominant force in India. In 1766 the first of the four Anglo-Mysore Wars began. The British were in alliance with Mysore, and they supplied Mysore with weapons and troops. The British and Mysore attacked a confederacy of other Indian states. This first war came to a quick close after three years of brutal fighting, ending in a draw in 1769 with no clear victory. ...read more.

Mysore ceded over half of its territory to the Company along with the Emperor's two sons as war hostages. The fourth and final Anglo-Mysore War was a reaction to the rise of Napoleon in 1799. Mysore, being a strong ally of the French, was key to Napoleon's plan to take over British colonies in India. The British invaded and Mysore and laid siege to its capitol, Srirangapatnam after a few engagements with Mysore's army. During the siege the Mysore ruler, Tipu, was killed. The Company, as a result of the capture of Srirangapatnam and the death of Tipu, the Kingdom of Mysore became a princely state in British India with its sovereignty as dead as their ruler. The Company's dominance in India can be easily explained. By allying themselves with weak local governments they were able to gain small footholds in India. Once they had secured a place upon the subcontinent, they could begin to make demands of each small state. After 250 years of slowly annexing tiny native kingdoms, the Company was able to unite the land under the British flag. ...read more.