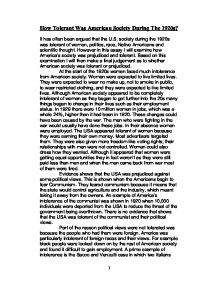 How Tolerant Was American Society During The 1920s?

How Tolerant Was American Society During The 1920s? It has often been argued that the U.S. society during the 1920s was tolerant of women, politics, race, Native Americans and scientific thought. However in this essay I will examine how America's society was prejudiced and tolerant. Based on this examination I will then make a final judgement as to whether American society was tolerant or prejudiced. At the start of the 1920s women faced much intolerance from American society. Women were expected to live limited lives. They were expected to wear no make up, not to smoke in public, to wear restricted clothing, and they were expected to live limited lives. Although American society appeared to be completely intolerant of women as they began to get further into the 20s many things began to change in their lives such as their employment status. In 1929 there were 10 million women in jobs, which was a whole 24%, higher than it had been in 1920. These changes could have been caused by the war. ...read more.

There is no evidence that shows that the USA was tolerant of the communist and their political views. Part of the reason political views were not tolerated was because the people who had them were foreign. America was particularly intolerant of foreign races and their views. For example black people were looked down on by the rest of American society and found it difficult to gain employment. A prime example of intolerance is the Sacco and Venzetti case in which two Italians were accused of a crime which they may not have committed and although they may not have done anything they were executed because they were Italian and disliked the American system of government. In the north of America black people were shown more tolerance than in the south, In the north black people received better education and jobs than the south. Native Americans were another race in which the Americans appeared tolerant of, but in fact they were not tolerated as the Americans took their homeland. ...read more.

The Fundamentals got a law passed in six stated which banned the teaching of Evolution. A teacher then brought a court case against the fundamentalists and won. This showed tolerance of the US courts of Scientific thought. Finally think that the American society was mainly intolerant as there was movement made but no drastic measures, which changed the status of women, different races, scientific thought, politics, and the Native Americans. Although things appeared to be getting better they weren't because while the Americans were giving in one hand they were taking in the other. For example with the Native Americans they were being given US citizenship but they were also loosing their land. Another example is with black people, although things appeared to be getting better there were still many blacks that didn't have civil rights such as voting education and lived in poverty. When they didn't like the different political views they tried to block them out by exporting people out of the country. All these examples prove how American society was prejudiced during the 1920s 1 ...read more.