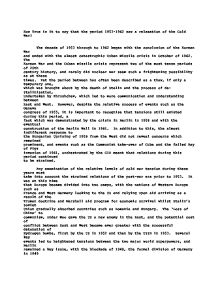 How True is it to say that the period 1953-1962 saw a relaxation of the Cold War? The decade of 1953 through to 1962 began with the conclusion of the Korean War and ended with the almost catastrophic Cuban Missile crisis in October of 1962. The Korean War and the Cuban missile crisis represent two of the most tense periods of 20th century history, and rarely did nuclear war seem such a frightening possibility as at these times. Yet the period between has often been described as a thaw, if only a temporary one, which was brought about by the death of Stalin and the process of de-Stalinisation, undertaken by Khrushchev, which led to more communication and understanding between East and West. However, despite the relative success of events such as the Geneva congress of 1955, it is important to recognise that tensions still existed during this period, a fact which was demonstrated by the crisis in Berlin in 1958 and with the eventual construction of the Berlin Wall in 1961. In addition to this, the almost indifferent response to the Hungarian Uprising of 1956 from the West did not reveal concerns which remained prominent, and events such as the Communist take-over of Cuba and the failed Bay of Pigs invasion of 1961, orchestrated by the CIA meant that relations during this period continued to be strained. Any examination of the relative levels of cold war tension during these years must take into account the strained relations of the post-war era prior to 1953. It was at this time that Europe became divided into two camps, with the nations of Western Europe such as France and West Germany looking to the US and relying upon aid arriving as a result of the Truman doctrine and Marshall aid program for economic survival whilst Stalin's Soviet Union gradually absorbed countries such as Romania and Hungary. ...read more.

During Truman's presidency, fear of Communism had been the most important factor in determining foreign policy, and this had a knock-on effect on domestic policy. Following Stalin's death and Eisenhower's election, American priorities changed slightly, as the USSR no longer appeared to be expanding further and as the nations of Western Europe gradually gained in strength and economic independence. It would be extremely simplistic to conclude that as a result of the factors mentioned above, the period 1953-1962 saw a relaxation of the Cold War. There were several events and decisions which led to increased tensions which could have escalated to the level of the Cuban missile crisis, and Khrushchev's foreign policy remained at best confusing and at worst schizophrenic. Problems emerged in 1955, at the same time as the 'Spirit of Geneva' had led to increased optimism about future relations, when West Germany was granted entrance to NATO. NATO had been set up 1949 as a treaty of collective security, involving nations such as the US, Great Britain, Belgium and Holland. Although its members would not openly admit it, it was clearly an anti-Soviet alliance. Western aid had been pouring into West Germany since its formal split, and by 1955 it had grown into a powerful nation once again. To the West, it was inconceivable that such a strong and prosperous capitalist nation should be denied entry into NATO due to its history, and in 1955 entry was granted. The main result of this was that West Germany was allowed to re-arm. The USSR was extremely unhappy about this, but also used it as a pretext to set up the Warsaw Pact in 1955. The Russians claimed that the Warsaw pact had been set up to resist future German aggression, and to protect Poland from German revanchism, arguing that they would wish to retake their territory up to the Oder Neisse Line. Ostensibly, this was the motivation behind the formulation of the Warsaw pact, although the USSR had been waiting for a legitimate opportunity to set up an organisation of Eastern European nations to give some security against NATO. ...read more.

In the end, following the advice of his executive committee (EXCOM), which included people such as MacNamara and Acheson, he set up a blockade around Cuba to prevent the arrival of further missiles on convoys from the USSR. As the Soviet ships headed towards the blockade, many Americans feared the consequences if they refused to stop, and there was a real possibility that the situation could have escalated into a nuclear war. Clearly, October 1962 does not represent a relaxation of the Cold War, although it is interesting to note that both leaders handled the situation excellently, and it was resolved once the US promised to remove their missiles from Turkey in exchange for a Soviet withdrawal from Cuba. The resolution of the crisis meant that neither leader felt humiliated, and nuclear war was prevented. Although this was arguably the closest the world came to nuclear conflict, the relaxation of tension and events of the preceding years undoubtedly meant that the effects were not as disastrous as they could have been, since communication between the USSR and the USA was clear and concise, and both sides were aware of the capabilities of their opposition. Hence it is correct to say that the period between 1953 and 1962 saw a relaxation of the Cold War. During this time, East/West relations improved dramatically as a result of the rise to power of Khrushchev, who was far more prepared to co-operate and co-exist with the West. There were several occasions where the two nations could be seen to be reaching some form of agreement, such as at Geneva in 1955, and ironically, over the issue of Cuba in 1962, and despite the fact that there were several occasions where relations were extremely strained, such as in Berlin in 1958 and relating to the take-over of Cuba in 1961, the tension never erupted into a full-scale conflict. ...read more.