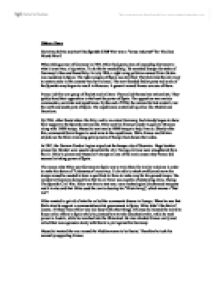 How true is it to say that The Spanish Civil War was a &quot;dress rehersal&quot; for The 2nd World War?

History Essay How true is it to say that The Spanish Civil War was a "dress rehersal" for The 2nd World War? When taking power of Germany in 1933, Hitler had great plans of expanding Germany to what it once was, a big nation. To do this he needed help. He searched Europe for states of Germany's likes and found Italy. In July 1936, a right-wing politician named Calvo Soleto was murdered in Spain. The right-wingers of Spain was terrified. They believed the only way to restore order in this country was by violence. The new-founded fascist party and some of the Spanish army began to revolt in Morocco. A general named Franco was one of them. Franco led this new group of fascists and military. They called themselves nationalists. They quikly faced their opposition in the hunt for power of Spain. The opposition was mainly communists, socialists and republicans. By the end of 1936, the nationalits had controll over the north and south parts of Spain. The republicans controlled big cities like Madrid and Barcelona. ...read more.

Hilter wanted to get rid of what he called the communist disease in Europe. When he saw that Stalin tried to support a communist/socialist government in Spain, Hitler didn't like that of course. At these times Hitler was also busy with other things. Of couse he wanted the world to focus on his affairs in Spain while he planned how to take Chechoslovakia, while he took power in Austria, while he marched into the Rhineland. He also attacked France orally and called their non-agression treaty with Soviet a plot against his Germany. Mussolini wanted the area around the Mediterranean to be fascist. Therefore he took his means by supporting Franco. Stalin was by now terrified of Hitler. If he could get Spain to be communists or at least socialists, it would mean much to his attitude to Germany. If Spain had become communists, that would have meant that Hitler's troops weren't ready at all for a war aginst his own country and he had stopped the spreading of the hatred against communists in Europe. France and Britain desperatly wanted to avoid war with Germany. ...read more.

Conclusion: The Spanish Civil War showed us historians how the power balance of Europe had changed. After the 2nd World War and to 1933, France, Britain and Soviet controlled everything. Now they had been reduced to puppets in a one-man show against communism. Hitler used Spain to train his troops and to scare Russia. He knew that a war was inevitable. Together with him stood Mussolini and now, also Franco(at least Hitler thought so). On the other side France and Britain, the cowards. Their non-intervention in Spain led to a serious amount of errors and weak actions taken by France and Britain which eventually led to the start of World War 2. Soviet was in a way under Hitler's controll. They had to approach him. He satisfied them, but he knew their non-aggression deal didn't mean anything. The Spanish Civil War also showed us how Hitler had planned to fare war. He had a very reliable air force, many soldiers and he could move them around quikly. Therefore the term "Blietz-krieg". Also it came clear out that civilians would suffer immensly during the comming war. Therefore I would say that it is very true to say that The Spanish Civil War was a "dress rehersal" or a "generalpr�ve" for World War 2. ...read more.