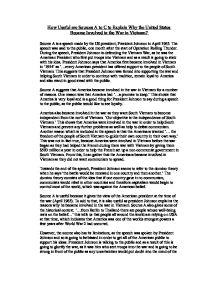 How Useful are Sources A to C to Explain Why the United States Became Involved in the War in Vietnam?

Source G is blaming military tactics for the reason why the US lost the war in Vietnam, as their ruthlessness with weapons meant that innocent people were dying and this made the American public unhappy as well as the American army, who became very unhappy with the situation. Source K is showing the results of an Australian public opinion poll on whether or not the public wanted their forces to continue in Vietnam or get taken back to Australia. The source was produced by Gallup Polls from 1969 to 1970 which means that this source is a primary source. Source K tells us how over a period of 18 months, the percentage of the public who wanted troops to continue in Vietnam. In April 1969 when the poll started, 48% of the public wanted troops to remain in Vietnam. This figure then went down in October 1969 to 39% before it then increased to 42% in October 1970. Overall, the percentage of Australians who wanted troops to remain in Vietnam decreased by 6% in a space of 18 months, which suggests that the public were slowly finding out information about the war and as a result of this, did not want their troops to continue in Vietnam. Source K also tells us that at the start of the poll in April 1969, 40% of the public wanted their troops to be brought home. This then dramatically increased to 51% in the space of 6 months before decreasing in October 1970 to 50%. This shows that people had mixed views on whether or not their troops should be brought back, as it increased and then decreased towards the end, however in general the Australians wanted their troops to be brought back home as there was a general increase of 10%. Overall, Source K has not got anything to do with the media being an important reason as to why the United States lost the war, as this source suggests that it was a difference in international opinions which resulted in the United States losing the war in Vietnam. ...read more.

These is showing them as being very cold hearted as they could have easily sent them into a concentration camp of some sort and kill them that way. This image could also be blaming the media due to the reason which I have already mentioned. The American public would have seen the image and would turn against the war. As they turn against the war, they may go on strikes and protests which would mean that the government's attention is taken away from the Vietnam War and back onto issues in America. Therefore due to a lack of concentration on the war, America may have lost the war and the media may have been to blame. Overall, I feel that this image blames both the media and also the military tactics for America losing the war. Finally to conclude my essay and referring back to the title, I believe that the media was partly to blame for America losing the war in Vietnam, but it is much more than that. There are four main factors which I believe are to blame for America losing the war, and they are, military tactics, the media, religion and also a difference in opinions around the world. Out of these four factors, I would say that they are all very important, but the outstanding factor is the military tactics, as it is these that got the media involved and then got religion and also countries around the world involved. I feel that the military tactics was the catalyst for America losing the war, but all the other factors did also play a prominent role in America eventually losing the war. I also think that as well as these four main factors, there are some smaller factors such as the economy of both Vietnam and America, politics and also a difference in opinions which led to the war ending in defeat for America. ...read more.