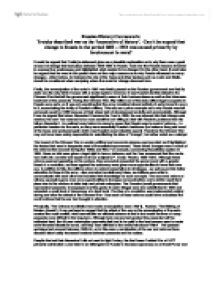 Russian History Coursework: Trotsky described war as the 'locomotive of history'. Can it be argued that change in Russia in the period 1855 - 1954 was caused primarily by involvement in wars? It could be argued that Trotsky's statement gives us a plausible explanation as to why there was a great amount of change that took place between 1855-1954 in Russia. Each war that Russia became involved in exposed her weaknesses and highlighted what needed to be changed On the other hand, it could also be argued that the wars in this period were not the major reasons as to why Russia witnessed so many changes - other factors, for instance the role of the Tsars and other leaders such as Lenin and Stalin, should be considered when analysing where the need for change stemmed from. Firstly, the emancipation of the serfs in 1861 was finally passed as the Russian government saw that its state was the only left in Europe with a feudal system; however, it was Russia's terrible defeat in the Crimean War that left the government significantly aware of their backwardness as well as the inhumane treatment of the peasants. During the Crimean War, fifty million out of the sixty million legal occupants in Russia were serfs: so it was not surprising that the army consisted almost entirely of serfs forced to serve in it, exacerbating the frailty of Russia's military. ...read more.

Although land-owners had granted the peasants half the cultivated land, the 49-year redemption payments that had to be paid to the land-owners were to make serfs' financial situations worse, and they were still tied to the newly-introduced "Mirs" . 148 peasant uprisings had occured between 1826-34, so in this case a combination of the war and reforms three decades later lucidly increased tensions between peasants and the nobles. Despite the fact that Alexander II did not want to fight Turkey, the the Russo-Turkish War of 1877 primarily culminated a year later in an initial gain for Russia to increase supremacy as a Great Power and improved its position in the Balkans. Because the Russians forced the Turks to sue for peace, Russia benefited greatly when the Treaty of San Stefano was signed: Russia obtained the right to occupy Bulgaria for two years; and Turkey was forced to surrender to nearby Russian areas such as Ardahan and Batum. However, the change made by the war that seemed favourable to Russia was short-lived. It was clear to Britain and Austria that Russia had gained too much from this treaty and it needed to be revised -- thus, the Congress of Berlin was enforced. ...read more.

Others were becoming increasingly aware of the fact that the autocratic rule was not the only way to govern as gradually more diverse classes were coming together. The 1905 Revolution is often referred to as 'the year of change' [N. Kelly; 'Russia and the USSR'] because an important factor to consider is that it was the first time that three separate classes had united to oppose the Tsar and government - the industrial workers, the middle-class and the peasantry. What is also significant about the Revolution is that pre-1905 strikes and demonstations had taken place primarily for economic protests -- 1905 saw hundreds of thousands of civillians protesting for political rights. The well-known event that commenced the 1905 Revolution was b****y Sunday. The march in St. Petersburg resulted in police forces firing on the protestors, killing 200 and injuring 100s more. Although Nicholas II was not present at the b****y scene, the event caused an even greater change to Russia in that year that had led on from the war. Father Georgy Gapon who led the march cried: "There is no God any longer. There is no Tsar'. The Russo-Japanese War seemed to have escalated hatred throughout Russia, and in a short space of time a long-term change had taken place. ...read more.