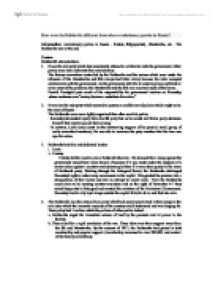 How were the Bolsheviks different from other revolutionary parties in Russia?

How were the Bolsheviks different from other revolutionary parties in Russia? Introduction: revolutionary parties in Russia - Kadets, SR(populists), Mensheviks, etc. The Bolsheviks won in the end. Content: Bolshevik's characteristics:- 1. It was the only party which had consistently refused to collaborate with the government. Other parties were more reformist than revolutionary. The factory committees controlled by the Bolsheviks and the unions which were under the influence of the Mensheviks and SRs always had bitter rivalry because the latter accepted collaboration with the government. As the government did little to restrain prices and failed to solve many of the problems, the Mensheviks and the SRs also received much of the blame. Donald Treadgold puts much of the responsibility for government inaction on Kerensky, whose weakness was "oratory became a substitute for action." 2. It was also the only party which seemed to possess a credible set of policies which might solve the crisis of Russia - The Bolsheviks were more tightly organized than other socialist parties. ...read more.

Now the Bolsheviks could claim to be resisting counter-revolution and on the night of November 6-7 they seized key points in Petrograd and arrested the ministers of the Provisional Government. Kerensky tried to rally loyal troops outside the capital failed to do so and fled into exile. 4. The Bolsheviks was the only political party which had openly proclaimed in their program the sole ideas which the immense majority of the country could understand and was longing for. Their policy had 2 realism which the policies of other parties lacked :- a. Bolsheviks urged the immediate seizure of land by the peasants and all power to the Soviets. b. They called for a rapid conclusion of the war. These ideas won them support away from the SR and Mensheviks. By the autumn of 1917, the Bolsheviks had gained in both membership and popular support. (membership increased to over 200,000, and control of the factory committees) ...read more.

There is no doubt that Lenin's concessions to Germany were necessary for any attempt to continue the war would have caused violent opposition in Russia generally. In the above programmes of the Bolsheviks, the "latent socialism without a doctrine" of the masses at last found its expression. Other parties - they were haunted by the myth of the Constituent Assembly and "war to a victorious end". The result would be nothing except demoralization. 5. The Bolshevik response was swift and ruthless. They started a 'red terror' through the Cheka. Members of Provisional Government were deported; Zemstvos and municipal councils in Petrograd and Moscow were dissolved; the Russian Orthodox church was attacked, separation of Church and State was proclaimed on February, 1918. Elections were held in November, 1917. When it returned a Social Revolutionary majority, it was dispersed by Bolshevik troops. In the summer of 1918, during the Civil War and Foreign Intervention, the Czar was murdered at Ekaterinburg. Conclusion With good leaders and good programme, the Bolsheviks succeeded to establish the first communist regime in history. ?? ...read more.