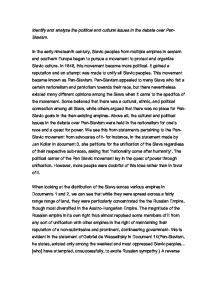 Identify and analyze the political and cultural issues in the debate over Pan-Slavism.

Identify and analyze the political and cultural issues in the debate over Pan-Slavism. In the early nineteenth century, Slavic peoples from multiple empires in eastern and southern Europe began to pursue a movement to protect and organize Slavic culture. In 1848, this movement became more political. It gained a reputation and an attempt was made to unify all Slavic peoples. This movement became known as Pan-Slavism. Pan-Slavism appealed to many Slavs who felt a certain nationalism and patriotism towards their race, but there nevertheless existed many different opinions among the Slavs when it came to the specifics of the movement. Some believed that there was a cultural, ethnic, and political connection among all Slavs, while others argued that there was no place for Pan-Slavic goals in the then-existing empires. Above all, the cultural and political issues in the debate over Pan-Slavism were held in the nationalism for one's race and a quest for power. We see this from statements pertaining to the Pan-Slavic movement from advocates of it- for instance, in the statement made by Jan Kollar in document 3, she petitions for the unification of the Slavs regardless of their respective sub-races, asking that "nationality come after humanity'. ...read more.

"What a delightful invitation", quips Frantisek Palacky- a Czech- in Document 11, "for the Russians to create a universal monarchy!" Austria's foreign minister at the time also references this fear in Document 12, stating that "our slavic nationalities are likely at a moment of dangerous crisis to develop pro-Russian tendencies." The Austro-Hungarian Empire, however, while resistant to the idea of the influence of the Russian empire, attempted to incorporate their avoidance of it into their treatment of the Pan-Slavic movement- this is evidenced in document 5. "Austria must... promote its national development... and thus destroy all illusion of a Russian Pan-Slavism ...among others and its own peoples, who would no longer regard Austria as an alien ruler." Some were even hesitant at the Pan-Slavic initiative due to what they viewed as an unrealistic ideal- a Russian anarchist, in document 6, [to paraphrase] states that while the Pan-Slavic goal aims for unity, the Russian Empire's true and dominant nature manifests itself in opposition of this goal. "You demand independence, and in Russia there is only mechanical obedience," states Bakunin. ...read more.

This is similar to the statement made in document 4 in that both share an opinion of not wanting to compromise existing characteristics for melted and likely failed new ones. Document 9's Bulgarian poet says it well: "The idea of Slavic unity... has developed little because it ignores our distinct identities." A final group of people wished to join the Pan-Slavic movement and build a Pan-Slavic Empire - but only following the destruction of already existing and large empires among Slavic nations. Trentowski, a Polish philosopher, states in Document 8 that "[he] would destroy, without effort, the Ottoman and the Austrian empires. The Slavs would rush into this battle in great number." However, the acknowledgement that if the Pan-Slavic movement were to be followed through with, then great conflict would result still existed among this group of people. It can be said in conclusion that the presence of already existing empires and domineering governments presented the greatest challenge to the Pan-Slavic movement. In the end, though there was no "Pan-Slavic Empire", many unions between Slavic countries did forms, as did Slavic languages. This was perhaps for the best, as these partial unions were perhaps more productive than the formation of a full-blown Pan-Slavic empire would have been. ...read more.