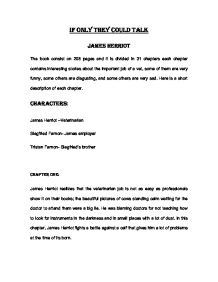 If only they could talk

IF ONLY THEY COULD TALK James Herriot The book consist on 208 pages and it is divided in 31 chapters each chapter contains interesting stories about the important job of a vet, some of them are very funny, some others are disgusting, and some others are very sad. Here is a short description of each chapter. Characters: James Herriot -Veterinarian Siegfried Farnon- James employer Tristan Farnon- Siegfried's brother CHAPTER ONE: James Herriot realizes that the veterinarian job is not as easy as professionals show it on their books; the beautiful pictures of cows standing calm waiting for the doctor to attend them were a big lie. He was blaming doctors for not teaching how to look for instruments in the darkness and in small places with a lot of dust. In this chapter, James Herriot fights a battle against a calf that gives him a lot of problems at the time of its born. CHAPTER TWO: Herriot arrives to Yorkshire Dales looking for a job as Veterinary Surgeon Assistant with the veterinarian Siegfried Farnon. CHAPTER THREE: Siegfried Farnon accepts James Herriot as his assistance, he talk with him about the importance of medicines and dozes of each one. Siegfried also shows all the rooms in the house and its uses to James Herriot. Having finished that, Siegfried Farnon takes Herriot on a trip to show him the town. In this chapter, Siegfried checks Herriot's technique at attending a horse that had pus on his foot. CHAPTER FOUR: Siegfried and Herriot go to a Pub (kind of bar but smaller and not sophisticated), they talk about veterinarian experience and ways of working. ...read more.

Two of the most beautiful girls from high school were there looking and laughing at him. At the end the horse released him, but all the saliva from the animal was running down his back. CHAPTER NINETEEN: James Herriot is invited to a big feast by his nephew (Mrs. Pumphrey's dog). It was one of the most special parties in town. James rents an outfit to go to the party. When he arrives to the party Mrs. Pumphrey takes him to say "hello" to his nephew "Tricky ". James was specially attended by a private waiter from Mrs. Pumphrey. The night was perfect and when James when back to his house at around midnight an unexpected call from a farmer broke the peace. He had some problems with a pregnant pig, and James had to go to see it. In fact, the pig had a dead little pig inside her, but there were 8 that were still alive. Mr. James was fighting with the born since 2 am until 8 am. It was a hard job but when the vet looked at the pigs with their mom he realizes that the effort was not in vane. CHAPTER TWENTY: Siegfried argues with the secretary about the obsession of order that she has. CHAPTER TWENTY-ONE: Siegfried operates a big black Labrador and leaves Tristan in charge of it care. When James examines the dog, and he thinks that the dog will not survive; the dog starts to give signs of life. CHAPTER TWENTY-TWO: Siegfried asks for help with the dog to another famous vet in town Mr. ...read more.

The farmers in the area are hospitable; some more than others - but slow to trust and quick to criticize again, some more than others. In the book, James Herriot has many strong characteristics which help him through his tough, and demanding, career. He has a vast knowledge of his practice, as well as his employer and friend, Siegfried Farnon. James Herriot has a great sense of humor, and is able to take embarrassment excellently. He also works well in strange or uncomfortable situations. James Herriot's most endearing quality is his deep passion and concern for his patients. James Herriot has a tremendous memory of all the signs, symptoms, medications, diseases, and sicknesses concerning animals. This helps him very much throughout his career; He is able to deduct a patient's problem without even needing an x-ray, or anything of that sort in one situation. The beauty of "If Only They Could Talk" is in Herriot's creating some really memorable characters, and in writing style that fits so well with the rigours of his job and the Yorkshire location. There are some wonderful moments of humor, overall it is funny but now and then it causes a good laugh. At times it's a little rustic, though there are very few instances of bad language. There is a good deal of medical terminology used. Just as Herriot is starting to get into the swing of things, Siegfried's brother Tristan shows up, causing more than a little tension in the household. Later on a secretary is introduced, who helps to add even more tension... but all ends well, or at least, James Herriot lives to tell the tale of his first year! ...read more.