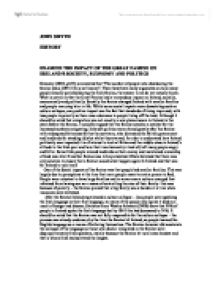 Impact of The Great Famine on Irelands Society, Economy and Politics

JOHN SMYTH HISTORY EXAMINE THE IMPACT OF THE GREAT FAMINE ON IRELAND'S SOCIETY, ECONOMY AND POLITICS Kinnealy (1995, p167) commented that "The number of people who died during the famine years (1845-51) is not known". There have been many arguments on how many people actually perished during the Irish famine, the answer is we do not actually know. What is certain is that the Great Famine had a tremendous impact on Ireland; socially, economically and politically. Socially the famine changed Ireland with smaller families and people marrying later in life. Whilst some social impacts were devastating such as culture collapse, one positive impact was the fact that standards of living improved, with less people in poverty as there was a decrease in people living off the land. Although it should be noted that emigration was not exactly a new phenomenon in Ireland in the years before the famine, it could be argued that the famine acted as a catalyst for the increased numbers emigrating. Ireland's politics were altered greatly after the famine with widespread bitterness felt by the survivors, who distrusted the British government and landlords for standing idly by whilst they starved. In order to understand how Ireland politically was impacted it is of interest to look at Britan and the middle class in Ireland's attitude to the Irish poor and how their involvement (or lack of) ...read more.

The fact that the Irish people (due to subdivision) did not own their own land, earned no pay or wages were factors which forced the peasants/cottiers to live off the potato crop, which when failed, contributed to the impact of the famine. After understanding subdivision, it is easy to see why, in the years after the famine, the Irish vowed to own their own land. One impact of the Great Famine that is often overlooked is the fact that the standard of living improved. There were bigger plots of land on the island (due to land becoming vacant due to emigration and death), less people living off the land (more livestock introduced) and there was a decreased population (caused by emigration, deaths). The fact that cottiers decreased dramatically after the famine also supports the higher standard of living argument. Cottiers were a majority before the famine as R.F. Foster (Modern Ireland 1600-1972) points out - 'By the famine the number of smallholders and cottiers outnumbered the farmers two to one, a balance that would change dramatically.' The Economical impact of the famine as catastrophic - there was a sharp population decline as people with emigrated or died. Cecil Woodham-Smith (the Great Hunger 1991) states 'In 1841 the population of Ireland was given as 8,175,124 in 1851, after the famine, it had dropped to 6,552,385 and the census commissioners calculated that, at the normal rate of increase, the total should have been 9,018,799. ...read more.

who were largely democratic, became popular in Ireland, with Britain's perceived mishandling of the Great Famine helping these movements to emerge. Many see the famine as a watershed in Irish history - a turning point that had a severe impact on Ireland, Socially, Politically and Economically. The British Laissez-faire attitude angered people, adding to the distrust now felt by many. Having seen at first hand the hunger and sheer desperation of their people, there was those who wanted to govern Ireland on their own, they believed home rule was the way forward. The young Irelander's of 1848 had attempted a revolution during the famine and were unsuccessful but there would be other movements (post-famine) who opposed British Rule and who pointed to the famine as proof that Ireland needed to rule itself. Whilst some pointed the finger at Britain (especially in Nationalist areas) there were those who believed the landlords were to blame as some (though not all) sought to gain wealth at the expense of their own people. Indeed in Nationalist areas murals still exist to keep the memory of the famine and the perceived injustice inflicted by Britain alive. There could be an argument that both parties should share a portion of responsibility, but the fact was Irish people, in the aftermath of the famine were determined not to let history repeat itself - as a result the face of Ireland was changed forever. ...read more.