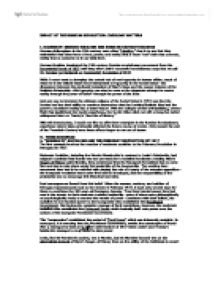 IMPACT OF THE RUSSIAN REVOLUTION: IDEOLOGY MATTERS I. BACKDROP: GERMAN IDEALISM AND RUSSIAN REVOLUTIONARIES German philosophers in the 19th century were often "Idealists," that is to say that they maintained that ideas have a force, power, and reality that is more "real" than that concrete, reality that so consume us in our daily lives. German idealism dominated the 19th-century Russian revolutionary movement from the Decembrist Revolt of 1825 until long after Lenin's successful revolutionary coup that we call the October (or Bolshevik or Communist) Revolution of 1917. While I never want to downplay the central role of raw hypocrisy in human affairs, much of what we in the United States have interpreted as hypocrisy in the Soviet Union-the dissonance between the profound humanism of Marx's ideas and the coarse violence of the Stalinist dictatorship-this hypocrisy can also be seen as the desperate attempt to coerce reality through the power of belief-through the power of the Idea. And one way to interpret the ultimate collapse of the Soviet Union in 1991 was that the Soviets had lost their ability to convince themselves that the Leninist/Stalinist Idea had the power to transform reality into a better future. With the collapse of this self-justifying, central Myth that legitimized the Soviet experience, the Soviet Union died not with a bang but rather whimpered into Lev Trotsky's "dust bin of history." With this introduction, I would now like to offer three examples in the Russian Revolutionary experience where Ideas profoundly affected the future course of events. Only toward the end of the Twentieth Century have these effects begun to run out of steam. II. THREE EXAMPLES A. "MODERATE" SOCIALISM AND THE FEBRUARY REVOLUTION OF 1917 The first example involves the reaction of moderate socialists to the February Revolution in Petrograd in 1917. Moderate Socialists, including the Marxist Mensheviks in contrast to Lenin's Bolsheviks, had adopted a position that Russia was not yet ready for a Socialist Revolution; reading Marx's Stages of History quite literally, they understood that the Bourgeois Revolution had to come first and had to take place under the leadership of the bourgeoisie. ...read more.

I would argue that many Third World leaders, for two contentious examples Ho Chi-Minh and Fidel Castro, who led revolutions to assert national pride, independence, and prosperity, turned to Communism because Lenin had provided a vocabulary with a coherent explanation for colonial degradation and a means for asserting national regeneration. Additionally, of the major powers, the Soviet regime alone more-or-less consistently supported the aspirations of those wishing to throw off the oppression of colonialism and capitalism. Of course, today, the Communist model no longer holds the same allure it once did. C. TWO MARXIST HERESIES: LENINISM/STALINISM AND MUSSOLINI'S FASCISM The final example of the power of ideas generated during World War I involves the intimate, kissing cousin-relationship between Stalinist Communism and Mussolini's Fascism. Despite facile assumptions, Fascism and Communism were not antipodes. Although their exact relationship remains difficult to define, there exist commonalties, as one author has pointed out: Fascism was the heir of a long intellectual tradition that found its origins in the ambiguous legacy left to revolutionaries in the work of Karl Marx and Friedrich Engels. Fascism was, in a clear and significant sense, a Marxist heresy. It was a Marxism creatively developed to respond to the particular and specific needs of an economically retarded national community condemned, as a proletarian nation, to compete with the more advanced plutocracies of its time for space, resources, and international stature. Was this kind of self-awareness present as thinkers and politicians struggled to define these two ideologies as they co-developed earlier in this century? In fact, many did recognize that their common interests held much greater weight than did the Talmudic differences between Fascism and Communism. Arturo Labriola's Avanguardia Socialista of Milan by 1903 had become the forum for Italy's Sorelian syndicalist revolutionaries, who were struggling to make Marx relevant and against reformist socialism. Such luminaries as Vilfredo Pareto and Benedetto Croce graced its pages, followed shortly by a second generation of Sorelian theoreticians, who came to dominate Italian radicalism for more than a generation. ...read more.

He lamented, "that which Fascism consciously sought, [the Soviet Union] involuntarily constructed." For him, the governments of Stalin, Mussolini, Hitler, and even Roosevelt were lurching toward a global system of "bureaucratic collectivism," a new form of class domination. Fascist theoreticians agreed with such convergence notions. By 1925, Panunzio claimed that Fascism and Bolshevism shared crucial similarities. Fascists noted that the Soviets had created an armed, authoritarian, anti-liberal state, which had mobilized and disciplined the masses to the service of intensive internal development. The supreme state generated and allocated resources, articulated and administered interests, and assumed and exercised paramount pedagogical functions. Thus, while the first Fascists were formulating the rationale for a mass-mobilizing, developmental, authoritarian, hierarchical, anti-liberal, and statist program guided by a charismatic leader, events had forced the Bolsheviks along the same course. Both intended to create a modern, autarchic, industrial system, which would insure political and economic independence for what had been an underdeveloped national community. With forced industrialization and "state capitalism," the Soviets hoped to bring Russia all the benefits of bourgeois modernization. In the face of required austerity, to mobilize their respective populations, the Communists and Fascists alike supplemented economic incentives with pageantry, ritual, ceremony, and parades. All this, coupled with territorial aggression, completed a compelling picture of "systemic symmetry." III. CONCLUSION I have presented three diverse examples of the impact of the Russian Revolution on subsequent history. There are other potential examples. I find it interesting that events so crucial to the twentieth century, now seem to be fading so rapidly in their influence. One real benefit of examining the Communist Revolution within the larger question of "how best to develop" is that the Revolution loses its sense of seminal criticality. For all the pathos surrounding the effort, it becomes just another interesting attempt at rapid development-a failed attempt at that. While I would happily argue that Marx still has relevance for us today, especially in his critique of capitalism if not particularly in his solutions, clearly Lenin and Stalin no longer do. ...read more.