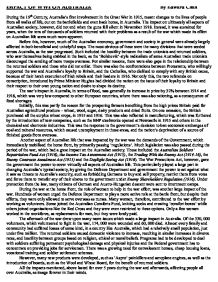 IMPACT OF WWI ON AUSTRALIA

IMPACT OF WWI ON AUSTRALIA By Edward Chan During the 19th Century, Australia's first involvement in the Great War in 1915, meant changes to the lives of people from all walks of life, out on the battlefields and even back home, in Australia. The impact on ultimately all aspects of Australian society, however, did not end when the guns fell silent in November 1918. Instead, it was sustained for years, when the tens of thousands of soldiers returned with their problems as a result of the war which made its effect on Australian life seem much more apparent. Before this, however, much of the Australian economy, government and society in general were already largely affected in both beneficial and unhelpful ways. The most obvious of these were the many divisions that were seeded across Australia, as the war progressed. Such included the hostility between the trade unionists and returned soldiers, who saw themselves being stabbed in the back, as the 'Bolshevik'-style radicalism of some Australian trade unionists discouraged the sending of more troops overseas. ...read more.

On one occasion, the British purchased all the surplus wheat crops, in 1915 and 1916. This was also reflected in manufacturing, which was furthered by the introduction of new companies, such as the BHP steelworks opened at Newcastle in 1915 and others in the chemical and electronic industries. This was the response to the government's decision to ban economic exchanges of coal and mineral resources, which caused unemployment in those areas, and the nation's deprivation of a source of finished goods from overseas. Another aspect of Australian life that was impacted by the war was the demands of the Government, which immediately mobilised the home front, by primarily passing 'regulations'. Much legislation was also passed during the period of the war, which had a great impact on the Australian society. These included the Australian Soldiers' Repatriation Fund Act (1916), the Income Tax Assessment Act (1915), the Trading With the Enemy Act (1914-16), the Enemy Contracts Annulment Act (1915) and the Daylight Saving Act (1916). The War Precautions Act, however, gave the government the power to cover virtually all aspects of Australian life. ...read more.

The aftermath of the war drew upon many more issues which made a large impact in Australia. Of the 330, 000 volunteers, which volunteered to fight in the war, 174, 000 were wounded and 60, 000 died. Almost every family and community had suffered losses of some kind, in a country like Australia, which had a relatively small population, just under five million. The returned soldiers caused domestic violence to increase, resulting in similar increases in divorce rates, and hostility between groups based on religion, ethical or moral beliefs. Programs had to be developed to deal with soldiers suffering permanent psychological damage and physical injuries and the Federal government has to concentrate on providing jobs for servicemen. There was a growing need for convalescent homes, cheap housing loans, vocational training and soldier settlement schemes. However, many new products were developed, such as 'Aspro' painkillers and aeroplane engines, as well as the introduction of boards, such as the Wool and Wheat Board, for the benefit of returned soldiers. All the impacts mentioned, above lasted for over 5 years during the war and afterwards, affecting people all over Australia, as image forever in their minds. ...read more.