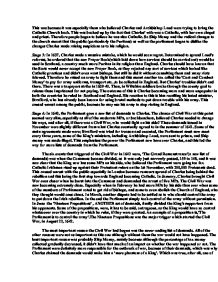 In 1637, Charles made a massive mistake, which he would soon regret.

This was because it was especially them who believed Charles and Archbishop Laud were trying to bring the Catholic Church back. This was backed up by the fact that Charles' wife was a Catholic, with her own chapel and priest. Therefore people began to believe he was also Catholic. So Ship Money and the radical changes to the church meant that the public (particularly the Puritans) as well as the parliament began to dislike the changes Charles made raising suspicions as to his religion. Stage 3: In 1637, Charles made a massive mistake, which he would soon regret. Determined to spread Laud's reforms, he ordered that the new Prayer Book(which laid down how services should be carried out) would be used in Scotland, a country much more Puritan in its religion than England. Charles should have known that the Scots would never accept the new Prayer Book, as they rejected any sort of services which looked like Catholic practices and didn't even want bishops. But still he did it without consulting them and many riots folowed. ...read more.

Some of the main agreements made were; Strafford was tried for treason and executed, the Parliament must now meet every three years, some of the King's ministers, including Archbishop Laud, were sent to prison, and Ship money was made illegal. This emphasises the power the Parliament now have over Charles, and this led the way for more lists of demands from the Parliament. The six events that triggered of the Civil War in 1642 were, 'The Grand Remonstrance'(a new list of demands) was when the Commons became divided, as it was only just narrowly passed, 159 to 148, and it was now clear that the King now has some MPs on his side, who believed the Parliament were going too far. Catholic Irishmen rised up against their Protestant rulers on the 1st November, with 200,000 Protesants dead. This caused unrest with the public especially in London because rumours spread of Charles being behind the rebellion and this being the first step towards England becoming Catholic. In January, Charles brought Civil War even closer when he burst into the Commons and demanded the arrest of five MPs. The Civil War was now becoming extremely close. ...read more.

The least important reason was probably Ship Money, mainly because although the percentage of tax money collected gradually decreased, it didn't have that much of an impact on whether the war happened or not. The Parliament were definitely more responsible for the outbreak of war, because of their demands, which was why Charles claimed the demands would make him a 'mere phantom of a King'. Which was true, after all, one of the Nineteen Prepositions were,'Parliament must control the education of the King's children. His children cannot marry without Parliament's approval.'This would mean he could hardly have a say in what happens to his own children, which, I feel, is going too far. This was why the war was inevitable after those prepositions. So, as you can see, there were many reasons why the war broke out. The Parliament were more responsible than the King, because they went too far and wanted to have more power than the King wanted them to. However, it was the moderate MPs in the end who made all the difference. If they hadn't thought that the Commons were pushing their luck then there wouldn't have been anybody on Charles' side, meaning no war, as you need two sides to fight a war. By Moaize Chechi 8W ...read more.