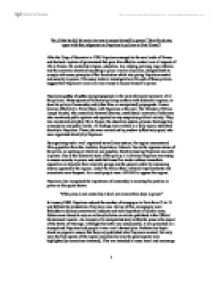 &quot;In all that he did, his main aim was to secure himself in power.&quot; How far do you agree with this judgement on Napoleon's policies as First Consul?

"In all that he did, his main aim was to secure himself in power." How far do you agree with this judgement on Napoleon's policies as First Consul? After the Coup of Brumaire in 1799, Napoleon emerged as the new leader of France and devised a system of government that gave him effective control over all aspects of life in France. He controlled religion, education, law-making, policing, legal reforms and the economic situation by putting in place a series of policies, designed both to comply with some principles of the Revolution whilst also giving Napoleon control and security in power. This essay looks to investigate how far each of these policies suggest that Napoleon's main aim was always to secure himself in power. Napoleons policy of police and propaganda is the most obviously repressive of all the policies. Many aspects of his heavy policing conform with dictatorial regimes, as does his policy of censorship and (often false or manipulated) propaganda. France became effectively a Police State, with Napoleon at the core. The Minister of Police, Joseph Fouch�, who controlled National Security, established a network of informers who monitored public opinion and reported on any suspicious political activity. ...read more.

Napoleon was raised a Catholic and was keen to encourage religion within France, as this quote shows: "No society can exist without equality of fortunes; and equality of fortunes can not exist without religion." However, the Concordat was manipulated to Napoleons obvious advantage as well. In signing the Concordat, the Pope agreed to endorse the Revolution and regime, state control of the churches and church appointments and accept the loss of church lands during the Revolution. Also, in 1802, Napoleon attached the Organic Articles, without papal agreement, to the Concordat. These guaranteed the revolutionary principle of religious toleration and made the Protestant and Jewish churches similarly subject to state authority. It can be argued that one of Napoleon's aims in forming the Concordat was to ensure a lack of interference from the church, meaning his position in France could not be affected by the Pope or any other religious order. However, whether or not this was his main motive in signing the Concordat is less certain. Although the church was a powerful tool in controlling and influencing the public and was often used as a vehicle of propaganda, Napoleon's desire to influence and manipulate the public cannot justify other aspects of the Concordat such as the state responsibility for the payment of the clergy. ...read more.

Others, such as his educational policy, are subtler, encouraging support for the regime through improved life within France. In all areas, he is seen as either directly influencing the public, either by force or by propaganda, or indirectly influencing the public by creating better conditions in France, therefore encouraging support of the regime. I believe that it was Napoleon's main aim to secure himself in power. After all, if he fell out of favour quickly, all of his other aims, such as creating a better France, would fall with him. It was implicit that he secured himself in power as soon as possible, in order that he might put all his other aims into action. Ultimately, most of his actions aimed either to limit or prevent the impact any opposes to the regime may have on Napoleon's security in power or to create a better France thereby increasing popularity of the regime. However that is not to say that other policies did not centre around a different aim, such as the economic policy, which aimed to create financial stability in France primarily, and possibly may have contributed to increased support and popularity of Napoleon and his regime. 1 ...read more.