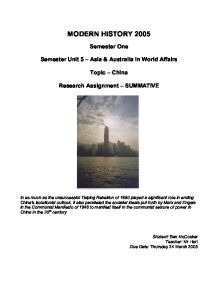 In as much as the unsuccessful Taiping Rebellion of 1850 played a significant role in ending Chinas isolationist outlook, it also paralleled the socialist ideals put forth by Marx and Engels in the Communist Manifesto of 1848 to manifest itself in the

Although it is almost certain that the Taiping rebels were oblivious to the socialist movement in the Western world, the similarities between the rebellion and the struggles of the proletariat in Europe are unmistakeable and are representative of the self-development of the Chinese people, culminating in the Communist seizure of power in 1949. The communist seizure of power in 1949 was not in itself the embryonic Chinese interpretation of European socialism it was perceived to be, but rather a fulfilment of the ideals espoused by the proto-communist Taiping rebels almost a century earlier. When viewed objectively, the Heavenly Kingdom of the Taipings is not so distant from the classless egalitarianism that Mao Zedong instituted on 1 October 1949 with the seizure of power by the Chinese Communist Party. Indeed, the doctrinal pillars upon which Hong built his Heavenly Kingdom have been described as "a primitive form of communism" (Hooker, R, 1986) and some have gone as far as to say that "the communist revolution may have been but a realisation of an underground movement in China [The Taiping Rebellion] which began in the mid eighteen-hundreds" (Ny, G, 1991). Like the Taiping Rebellion, the communist seizure of power was an example of western ideals being adapted to the Chinese condition and ...read more.

in his quest to "purge the country of the sinful rebels" (Poon, 2000). After the death of over 25 million Chinese citizens (McEvedy, 1978) and the devastation of 16 provinces, The Taiping Rebellion was finally suppressed in 1864, ending 16 years of reform but paving the way for the Communist Seizure of Power in the 20th century. Philosophically, the Taiping Rebellion of 1850 and the Communist Seizure of Power in the 20th century shared remarkable similarity in their egalitarian goals and quest to overthrow oppressive rule. Both were born out of a socioeconomic situation of deprivation and shame, with drought, famine, and overt foreign influence common to both uprisings. The Rebellion cannot be judged objectively on its failure as a revolution alone, as its primitive implementation of socialist ideals and reformation of China's isolationist outlook manifested itself in the communist seizure of power 100 years later. Its failure to institute permanent reform reflected not only the ideological flaws of Hong and his followers, but also the society's resistance to change, a result of hundreds of years of dynastical rule. As "one of the early tremors of a communist earthquake" (Franz, M, 1999), the Taiping rebellion played an integral role in the Communist seizure of power in the 20th century. ...read more.