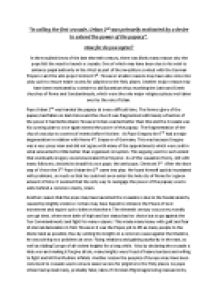 In calling the first crusade, Urban 2nd was primarily motivated by a desire to extend the power of the papacy. Discuss

Transfer-Encoding: chunked ﻿?In calling the first crusade, Urban 2nd was primarily motivated by a desire to extend the power of the papacy?. How far do you agree? In the troubled times of the late eleventh century, there was likely many reason why the pope felt the need to launch a crusade. One of which may have been due to his wish to enhance papal authority in the West as part of the investiture contest with the German Emperor and the anti-pope Clermont 3rd. However smaller reasons may have also come into play such to ensure easier access for pilgrims to the Holy places. Another major reason may have been motivated by a desire to aid Byzantium thus reuniting the Latin and Greek churches of Rome and Constantinople, which were the only major religious places not taken over by the rule of Islam. Pope Urban 2nd was handed the papacy at a very difficult time. The former glory of the papacy had fallen on dark times and the church was fragmented with barely a fraction of the power it had beforehand. ...read more.

Fixing relations and gaining authority in the east, as well as ridding Europe of all violent knights for a long while. Also by declaring the crusade a Holy war and making it forgive all sin, many knights were freed of heavy burdens and willing to fight and kill the Muslims infidels. Another reason the peoples of Europe may have been convinced to crusade was to ensure easier access for pilgrims to the Holy places. As pope Urban had spread many, probably false, tales of Christian Pilgrimages being massacred by Muslims. This was an easy way to anger the Europeans, even though many of which wouldn?t have strayed 50km from their own village. However it is possible that he was also replying to an appeal for military aid made my Alexius Comnenus in March of the same year, thus explaining the timing of the speech and appeal made at Clermont. By doing this he would once again bind the two cities of Rome and Constantinople. This was the prime time to launch the campaign against the Turks who were invading the Byzantines at the time, however at that moment their leader had ...read more.

So this likely was not the real reason for his speech but instead it was aid to cover up the real reason and enrage the Christians to hate the Muslims even though there misdeeds were over 400 years ago. In Hein site the Christians were a far more warring race than Islam and created most of the atrocities. For these reasons I believe the hatred of Islam was not Urbans real reason to call the first crusade. In conclusion, I believe the reason for Urban calling the crusade was in fact to extend the power of the papacy. As Following Gregory?s disaster of a reign this was a perfect opportunity to regain Papal power; firstly it would show huge influence to be able to get such a large amount of men to rally behind the Christian cause. Secondly it could?ve been an opportunity to unite Eastern and Western Christians, thus ending the Great Schism of 1054. Another bonus would have been the return of the Holy land to Christian hands. All in all extending the power of the papacy over Eastern Europe and the Middle East. ...read more.